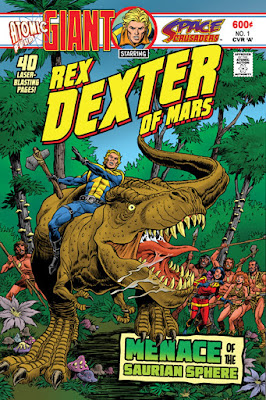 Several years ago, I read the graphic novel GRAVEDIGGER: HOT WOMEN, COLD CASH, written by Christopher Mills, and enjoyed it a lot. These days, Mills is putting together an entire line of comics called Atomic Action, which takes public domain superheroes and puts them in new stories written and drawn in the classic style of the Sixties and Seventies (which means they’re right in my wheelhouse). The first issue of these new comics, SPACE CRUSADERS #1, came out recently, and it’s great fun. 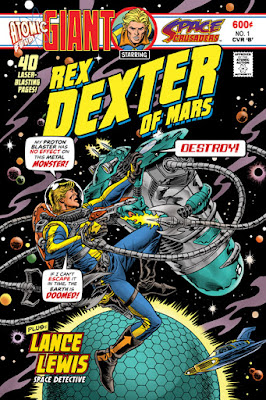 The lead feature is REX DEXTER OF MARS. Created by Dick Briefer, Rex appeared in a couple of dozen stories in 1939 and 1940. He’s the son of an Earth scientist and his wife whose spaceship crashlanded on Mars, so they were stuck there, where Rex was born. His parents never made it back to Earth, but eventually he did and became a swashbuckling hero battling assorted menaces from space and getting romantically involved with a beautiful girl he rescues from some space pirates. Then, in a tragic turn of circumstances, he’s blamed for the destruction carried out by a monster he’d captured and is exiled from Earth. Cynde, his beautiful girlfriend, takes to the spacelanes with him, of course, and Rex winds up as sort of a cross between Flash Gordon and Adam Strange. And that’s where Mills picks up his story in “Menace of the Saurian Sphere”. 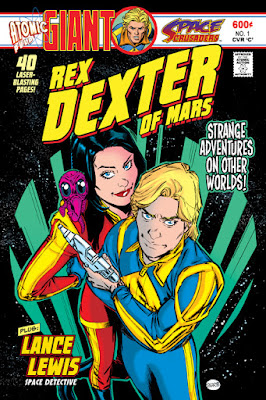 Despite the fact that he’s been kicked off Earth, that doesn’t stop Rex from agreeing to help when a giant metallic asteroid is spotted on a collision course with the planet. Rex and Cynde intercept the sphere and find an unexpected secret inside it. You can probably guess from the cover what it is. Mills’ fast-paced script is very entertaining and includes several nods to some legendary comics creators, and the art by Peter Grau is top-notch, with great storytelling ability. I really enjoyed this yarn.

The back-up story is the first installment of a continued story called “Lance Lewis, Space Detective”, a hardboiled detective tale set on a space station, with art by Nik Poliwko. I liked this one a lot, too, and look forward to reading the upcoming stories in the series.

Mills has some ambitious plans for this comics universe, and based on SPACE CRUSADERS #1, he and the artists working with him are more than capable of carrying them out. This 40-page, full color issue is available (with three variant covers) at IndyPlanet, a site that specializes in independently published comic books, and if you’re a long-time comics fan like me, I give it a high recommendation. (I bought some of Mills’ other comics, too, and will be posting about them later on.)

Thanks for the kind words. I'm glad you enjoyed it - these "Atomic Action" titles are about as pure a labor of love as it's possible to get.