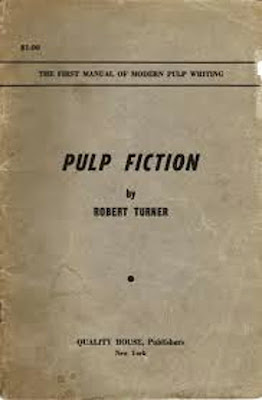 I know Robert Turner's name as the author of scores of stories (mostly mysteries) for the pulps and digests from the Forties through the Seventies. He also wrote a couple of early Ace Double mystery novels, THE TOBACCO AUCTION MURDERS and THE GIRL IN THE COP'S POCKET, copies of which I used to have but never read. He was also an editor and literary agent at various times in his career.

So when I came across a Kindle edition of this little book of Turner's from 1948, I grabbed it. I'm always interested in reading about the pulps specifically and writing in general, and given Turner's career (which was really just getting started good at this point), he knew what he was talking about.

His main point is that rules don't matter as much in writing as making your stories entertaining, and you entertain your readers by making them feel an emotional response. After establishing that, Turner discusses how to make plot, characterization, setting, and dialogue all serve that end. PULP FICTION is not a dry how-to book, though. Turner gets his arguments across in a fast, breezy, often funny way, just like his fiction. This is a very entertaining book, as well as educational.

There's also a section about how the editorial process of pulp magazines worked. Not really anything there I didn't already know, but again, Turner tells it in a light-hearted fashion that easily kept me reading.

Some of the advice in PULP FICTION would be considered old-fashioned and not the way you'd want to do things today. I grew up reading the pulps and what are now considered vintage paperbacks (they were just paperbacks then), many of which were either reprints from the pulps or written by pulp authors who moved into paperbacks when their original market dried up. So I'm pretty much in agreement with most of what Turner has to say. I've always aimed to be more of an entertaining storyteller than anything else. I like to think that I've never stopped learning, so I read this book with great interest and believe I picked up some useful things. I also had a great time reading it. Which is kind of the point, isn't it?

Got it. Thanks for the heads-up.

Got it. Thanks for the heads-up.

Robert Turner also wrote the full length hardcover, SOME OF MY BEST FRIENDS ARE WRITERS BUT I WOULDN'T WANT MY DAUGHTER TO MARRY ONE. It's about his career writing for the pulps and the digest crime magazines that came after the pulps died. He has a nice chapter on MANHUNT.

I'll have to track down PULP FICTION and SOME OF MY BEST FRIENDS ARE WRITERS. Sound great!

I grabbed it, too. Thanks!

Got it too. " rules don't matter as much in writing as making your stories entertaining, and you entertain your readers by making them feel an emotional response." I agree with that 100 percent.

Enjoyed the review, James. Turner also briefly appears in Robert Sampson's book about the Spider pulp, where Turner makes some disparaging remarks about Norvell Page's manuscripts. As you no doubt know, Turner was Pade's editor in the latter days of the Spider, and supposedly rewrote a few of the manuscripts himself. That and Turner's autobiography, mentioned upthread, was enough to compel me to seek out Turner's scarce paperback "The Night Is For Screaming," which I have yet to get around to reading.

Got the Kindle edition.

Wow! This looks incredible, just bought a copy of the ebook for myself. I was looking to learn more about Robert Turner and I knew just the blog to check out. Thanks, as always, James, for your insights!