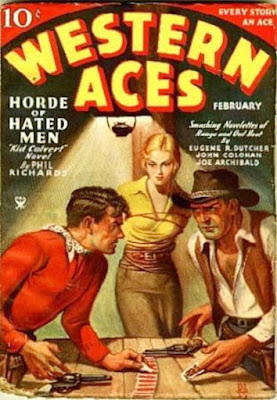 Good guy outlaws Kid Calvert and Calvert's Horde are back in the pages of WESTERN ACES with the February 1935 issue, in the novel (more like a novella) "Horde of Hated Men". There's a new author as well, with a little-known pulpster named Phil Richards replacing Lawrence A. Keating, who wrote the first Kid Calvert novel published the previous November. This installment opens with the Horde racing to rescue one of their own, gambler Dandy McLain, who has been framed for murder and is about to be strung up by a lynch mob. Needless to say, the Kid and his friends are able to save Dandy, and then they plunge into trying to solve the mystery of who is killing miners in the boomtown of Beaver Creek. While this is going on, the Kid also has to deal with his doomed romance with Terry Reynolds, the beautiful young woman who has taken over as sheriff from her late father.

This is about as slam-bang a Western pulp yarn as you'd ever want to read, full of shootouts, fistfights, narrow escapes, and races with death. There's also a fairly clever murder method. I spotted the real killer, but it took me a while. Richards, who wrote a couple of hundred Western, detective, and sports stories for the pulps between the mid-Twenties and the mid-Fifties without ever attracting much notice, has a really breathless, breakneck style that reminded me a little of Leslie Scott's work, although not as heavily descriptive.

The Masked Rider was sometimes referred to as The Robin Hood Outlaw, but that description actually fits Kid Calvert quite a bit better. The Masked Rider had only his Yaqui sidekick Blue Hawk. The Kid's got his whole Horde, a band of Old West merry men that includes Giant Anderson (aptly named since he's a really big guy), dour gunslinger Nate Willstock, the above-mentioned Dandy McClain, soft-spoken oldster Grama Sinton, and boozehound cook Peel Rogers. Characterization never goes much beyond those shorthand descriptions, but they're all likable galoots.

All five novels in the Kid Calvert series have been reprinted in a single volume by Altus Press, and if you're a fan of the Western pulps, especially the more action-packed variety, I think they're worth reading. At least the first two have been, and I'll be getting to the others in due time as well.

By the way, the great cover on that issue of WESTERN ACES is by Rafael DeSoto.

Right up my alley. My copy's on the way. Thanks for another great review, James!