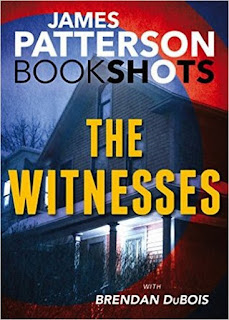 The family next door has a very dark secret.

The Sanderson family has been forced into hiding after one of them stumbled upon a criminal plot. Or so they think. No one will answer their questions. And the terrifying truth may come too late....

Man, this book is fast-paced. I didn't read it in one sitting, but I did read it in one day, which is unusual for me. Like all James Patterson novels (no matter who actually writes them), the chapters are short, there's lots of dialogue, there are innocents and truly despicable bad guys, and the plot twists are considerable. In this case, you've got an archeologist, his travel guide author wife, and their two kids (one of whom is a bit unusual) as the innocent family in trouble and being protected by a stalwart government agent, plus the people out to get them and some unlikely allies.

This is part of the Bookshots series, more novellas than novels, and I enjoyed it quite a bit. I have no idea how much is Patterson and how much is DuBois, but the prose is really smooth and entertaining. I haven't read anything else by DuBois except the science fiction story "The Siege of Denver", which is very good. I think I need to read more by him, though. I might read more of Patterson's Bookshots, although I'm not a fan of most of the series they spin off from. I really like novellas, though, so I'll probably give the stand-alones a try.

I snagged this the other day but haven't read it. I didn't realize these connected to series. I bought it on the strength of "The Siege of Denver" plus a few other short stories of DuBois's I'd read. He is a writer I intend to read more of.

This one is a stand-alone, but there are Bookshots that tie in to the Alex Cross, Women's Murder Club, Michael Bennett, and Zoo series, at least. Maybe more.

Available on Kindle for free. I downloaded immediately. Thank you.

Heard these were coming. Great to see they are out and they are good! Thanks for posting James!

I read a collaboration by Patterson and some other writer a number of years ago that was so godawful I haven't read a thing with Patterson's name on it since. I think the title of it was "The Quickie." I'm sure plenty of others have other writers and are good. Sounds like this is one.

I bought Cross Kill (featuring Alex Cross) because I enjoy novellas and, frankly, was curious about the concept. The story was intriguing and well-written. No major complaints. However, Cross Kill ended with a cliffhanger and -- as best I can tell – the book includes no information about Part 2.
Maybe it’s somewhere else in the book and I missed it. Judging by some of the Amazon reviews, others have encountered the same issue.
I have no issue with serialized titles. From a business standpoint, they make sense. But the publisher should’ve flagged readers on the front end.

I've tended to stay away from Patterson since he started bloviating about Amazon and indie publishing. He has a few collaborators whose solo work I like. I'd be willing to give those titles a try, but I've stayed away from anything with just his name on it.

Charles, I enjoyed THE QUICKIE more than you did. My review of it is here:
http://jamesreasoner.blogspot.com/2008/03/quickie-james-patterson-and-michael.html

Tim, I'm not a fan of the Alex Cross series so I probably wouldn't have read CROSS KILL anyway, but I agree that if it's just the first part of a bigger story that ought to be made clear.

Keith, Patterson's comments about publishing were almost enough to keep me from reading anything else he's involved with, but it's like a lot of books and movies these days, if I avoided work by all the people I disagree with, mostly I'd have to read books and watch movies that came out more than 50 years ago . . . Wait, come to think of it, I'm already doing that.

I find Patterson on his own a terrible writer. I have read a number of stories by DuBois and like him a lot and highly recommend him. He appears a lot in EQMM.

DuBois is one of the best mystery short story writers currently working. I've read dozens of his stories (including three collections) and they are always good. I'd also recommend many of his stand alones - Resurrection Day, Twilight (aka Dead of Night), Betrayed, Final Winter, etc.