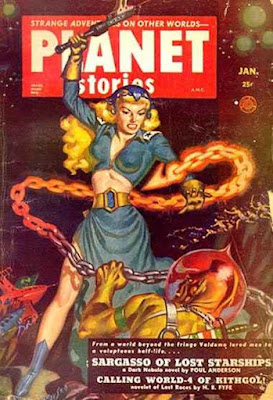 Gotta love those Allen Anderson PLANET STORIES covers, along with titles like "Sargasso of Lost Spaceships", the Poul Anderson (no relation) yarn in this issue. There are also stories by John Jakes (long before he was a bestselling writer of historical sagas), Margaret St. Clair, Bryce Walton, and others. Personally, I really enjoy this sort of adventure science fiction, but I've never been noted for my highbrow tastes.
Posted by James Reasoner at 6:00 AM

PLANET STORIES is a great magazine. In fact it's so great that I have two sets of the 71 issues, 1939-1954. One set is from the Frank Robinson collection with white pages. So beautiful that I'm afraid to read the copies. And one set in good to VG that's ok for me to read.

Planet stories, such a great title too. Had I been living at that time I would have gotten every issue. Wish I could have written for them.

I've read that Poul Anderson story, and liked it.

PLANET STORIES needs to be mined for a chain of anthologies. Leigh Brackett got the first volume of a proposed series of collections together, but no follow-up volumes appeared.

Seems to me that two parallel lines of anthologies could come out of PLANET. One for the the more thoughtful, 'higher-end' stuff (Brackett, Bradbury) and one for the more outrageous swashbuckling action tales (Fox, Walton, Fennel, etc).

If nothing else, someone should try to pull together a collection of the magazine's best Sword & Planet yarns. PLANET was one of the last places you could find earnest examples of that style, generally influenced by Edgar Rice Burroughs and Flash Gordon, but often with an attempt at a more serious, "adult" tone.
Modern readers need easier access to stories like Black Priestess of Varda, The Virgin of Valkarion, and Sword of the Seven Suns.

I love Planet Stories and the Poul Anderson in this issue is quite good in my opinion.

And the issues that essentially were edited by Jerome Bixby, and those that followed, were as good as any other sf magazine of the time, pretty much. GALAXY might've averaged a bit better, and F&SF. Might. Brackets hitting on all cylinders, of course, and Anderson and Charles Harness and such folk as Margaret St. Clair as noted in this issue were doing consistently good to great work.

Of course, PLANET STORIES was never quite as good once it went to digest size and had to change its name to ASTEROID STORIES.