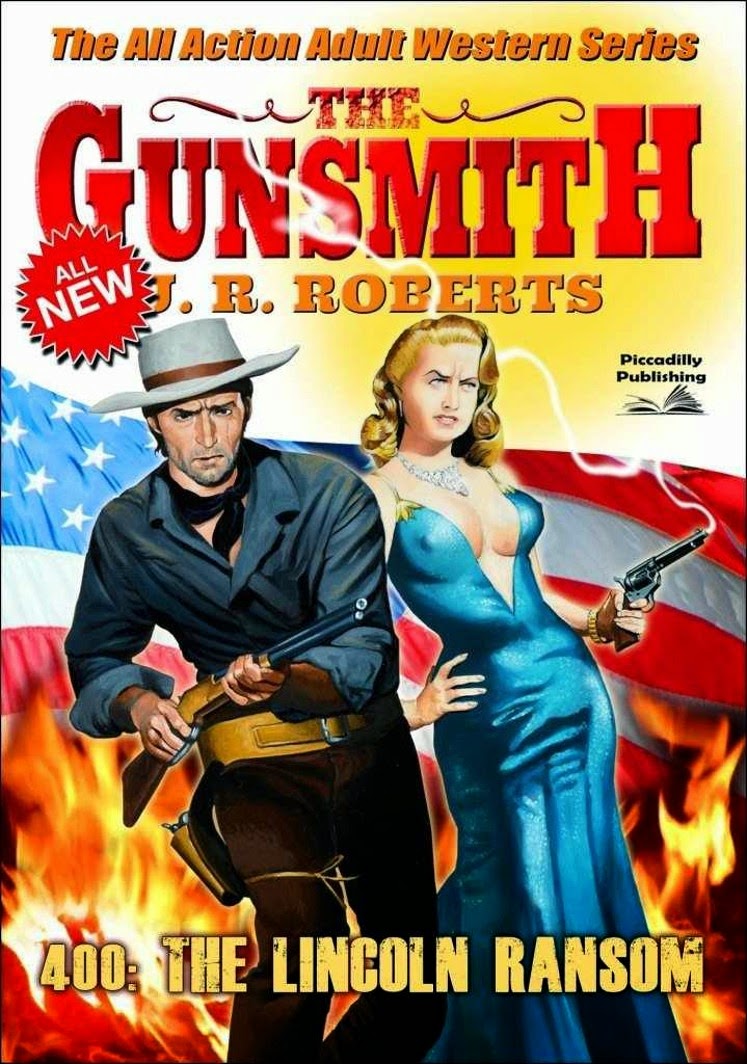 About 33 years ago, I read a book entitled MACKLIN'S WOMEN, the first book in a new Adult Western series called The Gunsmith. The author was J.R. Roberts, who I knew even then was really Robert J. Randisi. In fact, Bob may have sent me that copy of the first Gunsmith novel; I can't recall about that.

But I'm relatively sure it didn't occur to me as I read and enjoyed the first adventure of Clint Adams that Bob would still be writing them and I'd still be reading them more than three decades later.

That's the case, however. I just read THE GUNSMITH #400: THE LINCOLN RANSOM. This is a milestone in more ways than one. Not only the 400th book, making The Gunsmith one of the longest-running Western series ever, but the first book from the series' new homes, Piccadilly Publishing for the e-book editions and Western Trailblazer for the trade paperbacks.

In this one Clint is working for the government, as he does from time to time, on a top-secret mission: someone has stolen the coffin containing the body of Abraham Lincoln from its tomb in Springfield, Illinois, and is demanding $100,000 ransom for its return. The ransom is supposed to be paid in a small town in Colorado. Clint gets the job of delivering the money and recovering the former President's body, but of course things don't turn out to be quite that simple as he also uncovers the conspiracy behind the theft, with some help from his old friend, private detective Talbot Roper (who has starred in some Randisi novels of his own and may well again one of these days).

As usual with Gunsmith novels, THE LINCOLN RANSOM is driven mostly by dialogue and action and is very fast-paced. Bob's writing has a distinctive voice that's always enjoyable. If you've been a Gunsmith fan in the past, there's no need to stop now. I think the series is going to be around for a long time yet.

I bought this book--my first ever Gunsmith--and am enjoying it. Nice to know there's 399 more! Is there a Top 10 that you like?

I haven't read enough of the series to venture a Top 10, but I'm really fond of the early books that are in first person. I also enjoy the ones where Clint meets historical figures like Wild Bill Hickok. But if you like one Gunsmith chances are you'll like all of them. It's one of the most consistent Western series I've ever encountered.

Good review--you really summed it up. Fast-paced books that are dialogue-heavy are my favorites, and that's what Randisi writes.

I'm partial to first person and loved Macklin's Women, but The Lincoln Ransom was also a compelling read that I'd recommend to anyone. Other than #1 and #400, I've only read a few Gunsmiths so there's a lot for me to enjoy. Yep, I'm looking forward to it.

Now that is continuity.

I have a few books by the author and probably a couple of Gunsmith novels too. The plot revolving around the theft of Lincoln's coffin sounds very interesting and I'd certainly like to read this one as another instance of alternate history, so to speak.

Have read all 400 plus 401 and All the Giants. All are action driven but personal favorites are the James West /Secret Service connection. We even got the Johnny and Jamie West connection explained to the Wild,Wild West in one book.Just wish they had gone to 400 in the original format.