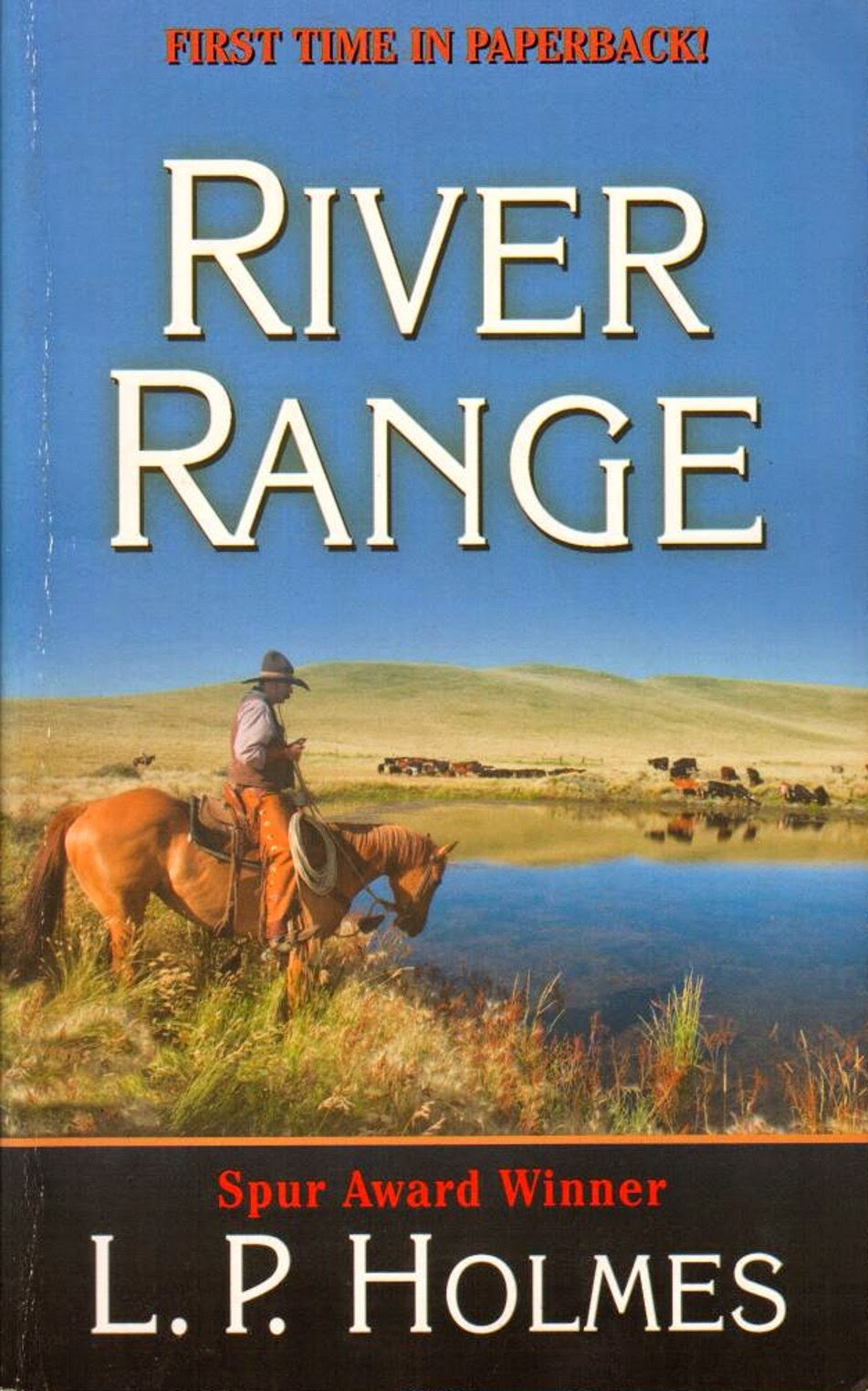 A few weeks ago I wrote about L.P. Holmes' Ace Double Western THE BUZZARDS OF ROCKY PASS, which is reprinted in this volume under its pulp title "The Buzzard's Brethren" (ACTION STORIES, August 1941). The other two stories in this collection are the novelette "Horse Thief Trail" (originally published under the title "Make Way For a Maverick" in the July 1942 issue of WESTERN TRAILS) and another short novel, "River Range", from the May 17, 1946 issue of RANCH ROMANCES.

In "Horse Thief Trail", young orphan Jeff Hawn is taken in and raised by an outlaw and the man's long-suffering wife. When the woman Jeff regards as his mother passes away, he takes one of the outlaw's horses and sets out on his own, but not without being pursued by the man and the rest of the gang. Jeff gets away and eventually becomes a tough young lawman, working as deputy for a sheriff who has a beautiful niece and a connection to Jeff's history that's a fairly big coincidence to swallow. Despite that, the story races right along with plenty of action and Holmes' usual fine prose. And if the ending is predictable, it's no less enjoyable getting there.

"River Range" is set along the lower Colorado River in Arizona Territory and utilizes the fairly uncommon plot of shipping cattle by riverboat. The protagonist is Boone Logan, the foreman of the C Cross ranch. Holmes has a habit of using ranch foremen as his heroes, rather than the owner of the ranch. Logan is a tough customer who rubs a lot of people the wrong way, so when rustling and other trouble begins to plague the spread, there are plenty of suspects. Since this was a RANCH ROMANCES story, there's plenty of "woman interest" (as the pulp editors called it) in the form of the rancher's beautiful daughter from back east. Other than the riverboat angle, there's nothing really surprising in this yarn, but Holmes was a master at pacing a story and there are also some really nice descriptive passages about the stark but picturesque terrain.

Books like this are pure entertainment for me. I really enjoyed all three stories in RIVER RANGE. If you're a fan of traditional Westerns, you won't go wrong with this book or anything else by L.P. Holmes, I suspect.
Posted by James Reasoner at 6:00 AM

Did you ever read his Spur-winning work? Did he step it up for that, and would it make for abetter introduction?

Todd,
Holmes won only one Spur, for the novel SOMEWHERE THEY DIE in 1955. I haven't read that one. I've found him to be a very consistent writer, though, nothing groundbreaking in plot or theme but a really solid craftsman with a great grasp of pacing. If you enjoy one of his books, chances are you'll enjoy most of them.