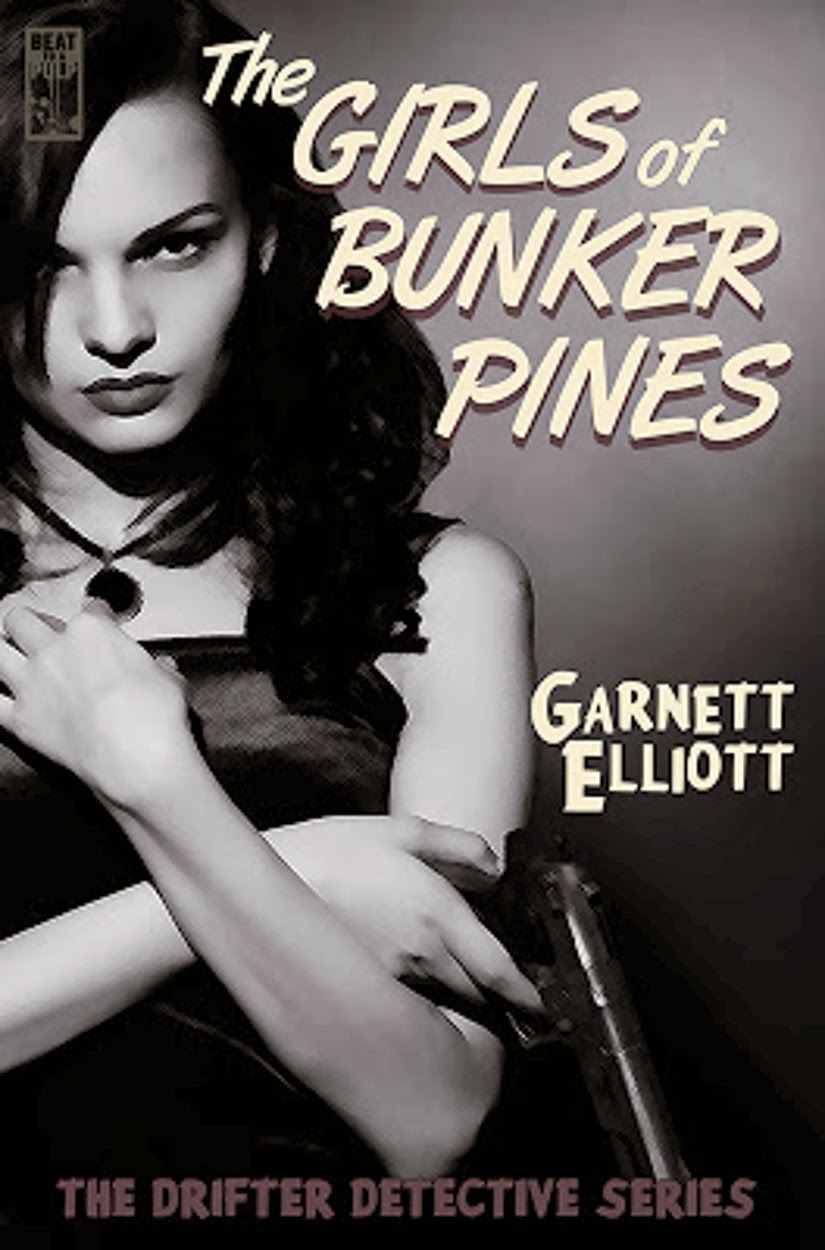 THE GIRLS OF BUNKER PINES is the third adventure of Jack Laramie, the Drifter Detective, in what has become one of my favorite current private eye series. Jack, as you may recall, is the grandson of legendary Old West marshal Cash Laramie, but he's a very different sort of character. He wanders around Texas in the mid-1950s, living out of a horse trailer and scrabbling for a precarious living as a private detective. It's a wonderful basis for a series, and author Garnett Elliott delivers another fine yarn in THE GIRLS OF BUNKER PINES.

This time a case involving a traveling preacher and a married woman with a wandering eye involves Jack in something even darker and more dangerous. As a favor to an ex-GI who gives him a hand in that case, he investigates a land development scheme in which veterans are being recruited to invest money in underground houses. Naturally there are some beautiful women involved (the girls of the title), along with plenty of shady characters.

As a bonus this time around, Elliott provides more background on Jack in the form of flashbacks to his service as a waist gunner in a B-17 during World War II. These sections are excellent and give the reader a better sense of who Jack is and what brought him to the life he leads. The scenes set in the Fifties ring true as well. It's hard to write period fiction that comes across as authentic without being overdone, but Elliott always manages to do so quite effectively.

Mostly THE GIRLS OF BUNKER PINES is just plain fun. Fast-paced, with good characters, a twisty plot, some wry humor, and a lot of darkness lurking under the surface (figuratively and literally), this is just about everything you'd want in a good private eye yarn. I had a great time reading it.

E-book on Amazon
Trade Paperback on Amazon
Posted by James Reasoner at 5:30 AM

Thanks for the review, James. And for spotlighting the B-17 passage that I found particularly well done and rousing.

Thanks for your thoughtful review. I love period fiction, as you can probably tell, and some of the WWII scenes come from my father's experiences as a B-17 navigator (but, fortunately, not a P.O.W.)