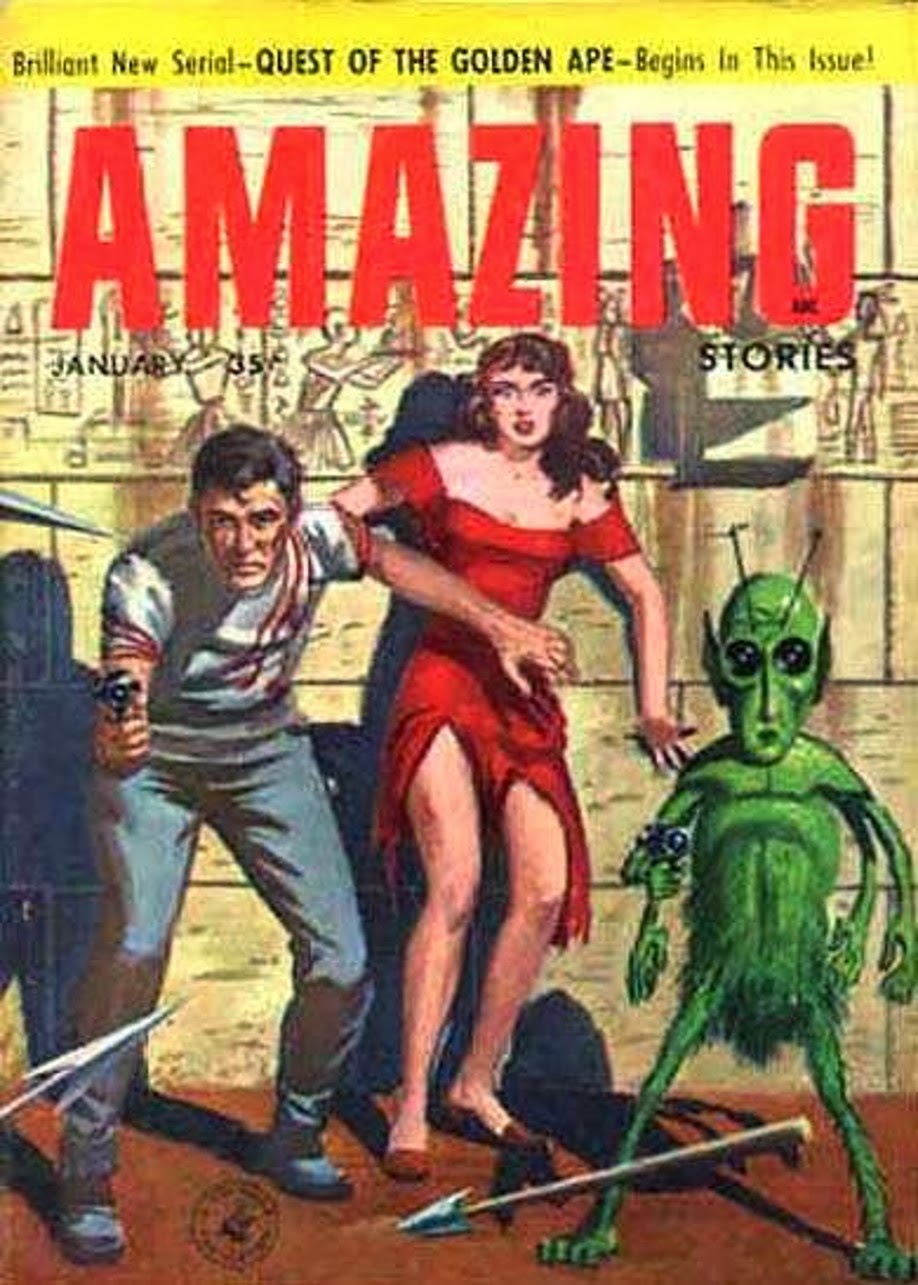 There's some question as to who actually wrote this novel, which was originally published as a serial in the January, February, and March 1957 issues of the science fiction digest magazine AMAZING. Most sources credit it to Randall Garrett (writing as "Ivar Jorgensen") and Milton Lesser (writing as "Adam Chase"). It's well established that Lesser, better known for his hardboiled mysteries under the name Stephen Marlowe, was Adam Chase. Robert Silverberg, who knew everyone involved, says that Jorgensen, in this case, was really Paul W. Fairman, the editor of AMAZING. Jorgensen started out as one of Fairman's pseudonyms before it became a house name.

Regardless of who wrote it—and I lean toward Fairman and Lesser, myself, with Fairman writing the first installment and Lesser the second and third—QUEST OF THE GOLDEN APE is a fine example of the sort of science fiction "they don't write anymore", to the dismay of old codgers such as myself who grew up reading this stuff. It's mostly adventure, with only a little bit of science thrown in to make it colorful. 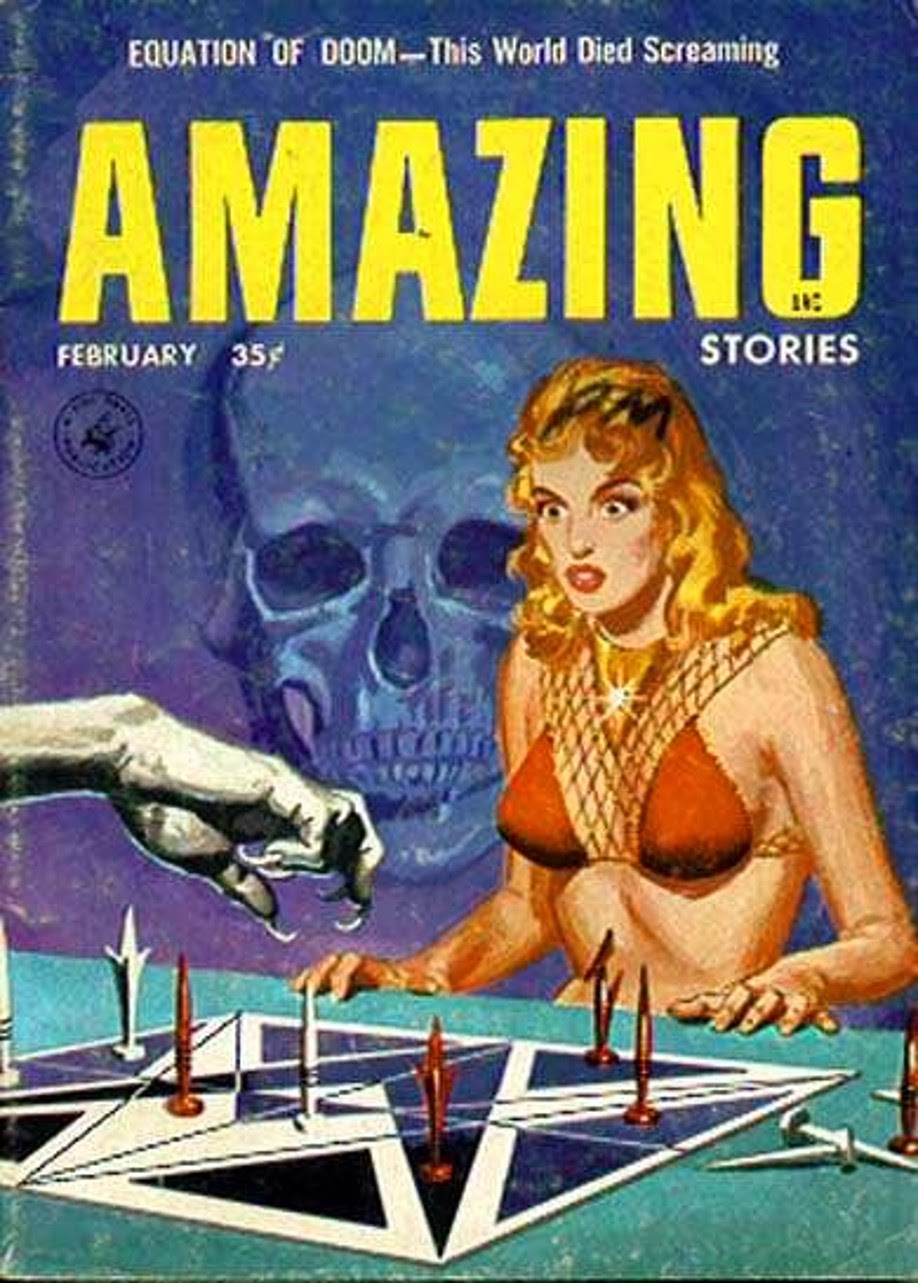 The story opens with a mysterious, deserted old mansion somewhere in an unnamed eastern state, and a hundred-year-old duty carried out by a lawyer whose great-grandfather was hired by a mysterious old man. (Lots of mystery right off the bat, you see.) On this particular day, the lawyer has to go to the old mansion and open a sealed crypt beneath it. What he finds there is a giant, god-like, apparently young man in a state of suspended animation. Of course the lawyer awakens him, as he's supposed to, turns over to him a mysterious package that contains a bracelet of an unknown alloy, and before you can say, "John Carter", our amnesiac hero is transported to an alien world where he finds himself in the middle of intrigue, danger, and romance.

You're either rolling your eyes by now at this brief description of the plot, or else you're remembering what it was like to be twelve years old and encountering a yarn like this for the first time. I would have been utterly enthralled, probably sitting in the rocking chair in my parents' living room and rocking back and forth so hard that my mother would gripe at me and tell me I was fixing to turn the chair over—which was known to happen from time to time. 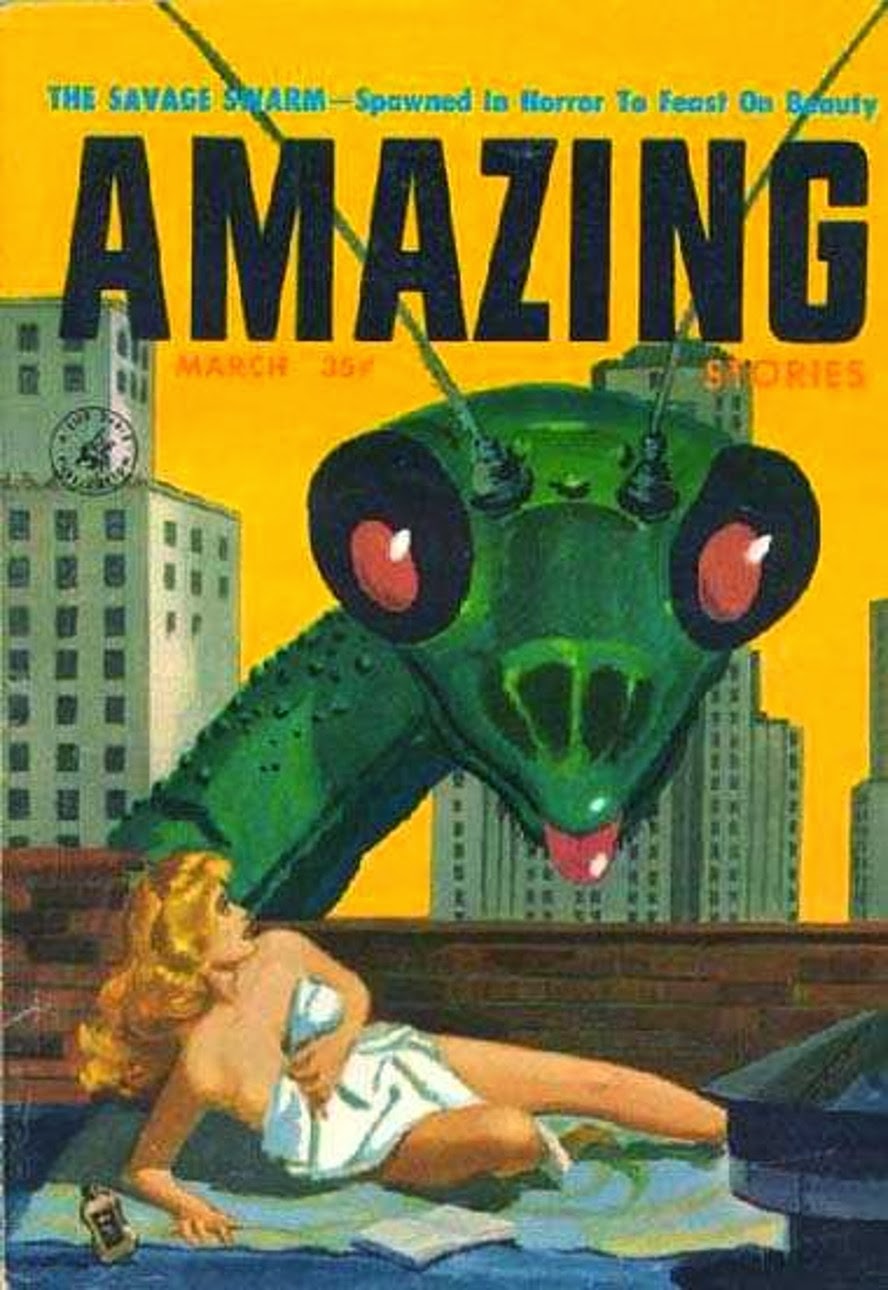 There's a lot of Edgar Rice Burroughs influence in this novel, as our hero, who dubs himself Bram Forest for reasons that make sense in the context of the story, finds himself in the middle of warring factions on the planet Tarth, which orbits the sun exactly opposite from Earth, which explains why we've never discovered it. (Isn't this the same gimmick that's used in the Gor books by John Norman? I only read the first one of those about fifty years ago and didn't care for it.) There are a couple of decent plot twists that set this apart from the John Carter series, though. There's also some Doc Savage influence with a hero raised from infancy to be a hero, an echo of Superman with a baby sent from one planet to another, and a lot of sword-and-planet swashbuckling of the sort that we've encountered many times from many authors, carried out at a competent level.

The quality of the writing definitely improves from the first installment to the second, but nobody reads this kind of yarn for fancy prose. The appeal of QUEST OF THE GOLDEN APE lies in its headlong pace, its colorful action, and its larger-than-life characters. The hero is mighty-thewed, the heroine is beautiful and often finds herself without clothes, the villains (including an evil queen) are truly despicable, and a rousing good time is had by all. At least, I had a rousing good time, and that's why I read books, after all.

QUEST OF THE GOLDEN APE has been reprinted once, and e-texts of it can be found in numerous places on-line. If you're capable of hearkening back to the era in which it originally appeared, you might enjoy it a great deal. I certainly did.
Posted by James Reasoner at 5:30 AM

Great stuff. By am amazing (heh) coincidence, last night I was feeling a bit nostalgic and pulled a 1958 issue of AMAZING STORIES off the shelf to read. I'll be doing an FFB report on it in a couple of weeks.

This the kind of stuff I looked high and low for as a kid but rarely found in the small town I lived in. Our Rexall Drug just carried the usual spinner racks of comics and I don't remember seeing any science fiction/fantasy rags. But when I did get my grubby little hands on something like this, it was usually by Burroughs or Bradbury or Hamilton, and I'd read it in a hurry under the cottonwood tree in our backyard, by the clothesline. I can still hear the cattle bawling in the pasture across the road, and smell them critters on the wind. I'm gonna hunt this up and read it and be that kid again.

Works for me. I'm adding to my old-school/pulp yarn list. I'm currently reading Doc Savage: Resurrection Day and if I can believe that story, I can believe this one. Is there too little of this kind of story nowadays?

When I was 13 in 1956 I couldn't read these magazines and stopped buying AMAZING. My favorites were the classier digests like GALAXY and FANTASY AND SCIENCE FICTION.

But now I'm alot older and I'm buying and reading the AMAZING and FANTASTIC back issues. I guess that says something about me. I don't know what!

James you've made my year with this post. I still have these magazine. Amazing and Fantastic were my favorites though I bought and read them all. Bill Crider and I were distinguished members of "The Cosmic Pen Pal Club" or something like that. I really liked Peter Brandvold's letter. Same here-"I'm gonna hunt this up and read it and be that kid again." THANKS JAMES!

I've got an S&S book by Jorgenson. Not sure if it is a pseudonym

"Ivar Jorgensen" started out as a pseudonym for Paul W. Fairman but came to be used as a house-name. If I remember correctly, later on the last name was sometimes spelled as "Jorgenson". Some of the novels and stories have been attributed to the real authors, but a lot are still unknown.

There was a hardcover edition (called simply THE GOLDEN APE and by-lined solely by Adam Chase) published by Avalon in 1959.

I'm not sure but I dimly recall that Robert Silverberg wrote the sequel.

Yowsa. I covered the Fairman years at ZD from my grumpier perspective in my post for today.

Jerry,
I didn't know about the Avalon reprint. Thanks for the info. This story is short enough it probably didn't have to be cut like many of the Avalon SF reprints were.

Ed,
I believe you're right about the sequel, but I don't remember where I read that. I may have to look that one up and see if I can find a copy of it. I'd like to read Silverberg's take on the characters and setting.

You had me at "Golden Ape."

Thanks for the tip. I'll never get tired of those kinds of stories. Plus: Golden Ape!

Thanks for bringing this to my attention! I eat this kind of old-school pulp "planetary romance" up. Like Peter Brandvoid above, this is the sort of thing I scoured the used paperback bookstores for in the 70s and 80s, but rarely found, other than the usual suspects like Burroughs, Howard etc.

Mark,
In the spirit of full disclosure, the Golden Ape doesn't really play a big part in this one, despite the title.

I still have those three issues...lousy covers but the interior illos weren't bad. Typical sword & planet stuff but with one new idea...the whip-swords! Only time I've ever come across those...
Mike