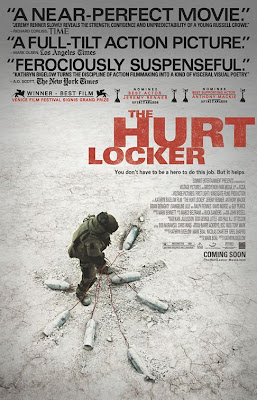 Some of you have already weighed in with your favorable opinions of THE HURT LOCKER, and I’m glad to say that I concur: it’s a very fine film, worthy of its Best Picture nomination, and I sort of hope it wins.

For those of you who haven’t seen it yet, it’s the story of a small group of soldiers in Iraq who work as bomb disposal experts. There’s not really much of a plot. They go out and deal with a bomb, they go out and deal with a bomb, they get trapped in a desert firefight while they’re on a mission to dispose of a bomb, they deal with an Iraqi civilian who’s forced to be an unwilling suicide bomber, etc. Between missions, we get a little background on the three main characters, but not much. And this is one case where the technique works just fine. The harrowing details of these soldiers’ day to day lives are very effective.

Along the way there’s also a countdown to the end of the team’s rotation in Iraq. Even though that’s a bit of a cliché, it adds to the realism of the film. There are plenty of explosions, but they’re not the sort of fancy, pyrotechnical Stuff Blowing Up Real Good so common in films. They’re loud and dusty and grim and dangerous, sort of like real explosions must be.

The acting is fine all around, but Jeremy Renner, who was really good as a cop in the short-lived TV series THE UNUSUALS, is great as the new sergeant who comes in and takes over the team after the previous team leader is killed in an explosion early on. He’s good enough that I need to find out what other movies he’s been in.

I also liked the fact that THE HURT LOCKER doesn’t seem to have any political axes to grind. It’s really more of an old-fashioned GI movie about this handful of soldiers, the way they interact, and the job they do. And it doesn’t hurt that it has some of the most suspenseful scenes you’ll ever see.

I think this is far and away director Kathryn Bigelow’s best film, and it’s the only thing I’ve watched lately that may hold up over the years as a great film. If you haven’t seen it yet, you should.
Posted by James Reasoner at 2:04 PM

I agree with everything you said, especially the part about not having an axe to grind. And the movie doesn't attempt to overanalyze or overexplain the protagonist. He is what he is without a lot of psychobabble.

I've heard from many that it's exemplary film making. And I'm glad it "doesn’t seem to have any political axes to grind." That's nice for a change.

I've seen nine of them and I have to say I think this is the best. It's a personal story as well as a war story.

Totally agree with all of this. I was surprised how much I liked it considering that it really doesn't have much of a story. But you don't need it.

I really like that it's just about guys who go out every day and do the job-- for better or worse-- and how it affects them. Brilliant stuff and I look forward to seeing it again. Jeremy Renner was also in 28 Weeks Later where he was good, but I really liked him in the episode of House where he played a aging Punk Rocker who's past is catching up with him.

It's a brilliant piece of film-making. Very elegant. If it wins Best Picture I will be a less cynical man. If that bright, beautifully decorated turd Avatar wins, more cynical.

I thought it was very political in its way to show how very much out of touch the guys in Iraq were, not really knowing what they were doing there and why, and being really alienated from the people of Iraq. But it's true that there are no sermons or lectures about the reasons and effects of the war.

I also hope it wins the Oscar.

I think "turd" is way too strong for Avatar, it was fun, exciting, groundbreaking in it's techniques. Plot was weak, but that's true of others on the list too.

I find it amazing that so many people keep holding Avatar up to such a high standard when it comes to the story and plot. While it may be familiar, it is clearly a story people want to see. And it is presented in a fresh and brilliant way. If the visuals were the only selling point many other films with amazing visuals would have broken 2 billion at the boxoffice over the years. Avatar may be Tarzan at heart, but it also has an emotional impact that a massive audience has responded to.

On the other hand, I see nothing "original" in THE HURT LOCKER, but that too, is brilliantly made.

If the same standards of originality that people want to hold Avatar up to were applied to all movies you might as well pave over Hollywood and put up a giant Wal-Mart.

I'd like to see the big long list of "original" films of the last twenty years that people imply exist when they are slagging Avatar in the story department.