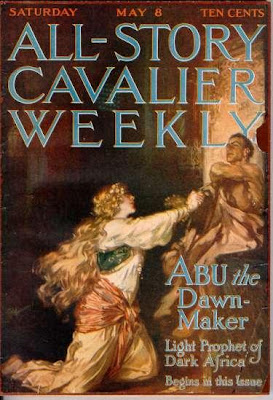 Unseen since it was first serialized in the early pulp ALL-STORY CAVALIER WEEKLY, Perley Poore Sheehan’s novel ABU, THE DAWN-MAKER is the story of a slave revolt and native uprising on the coast of East Africa. Abu, a white barbarian with the soul of a poet, is the slave of an Arab merchant. When he finds a mysterious golden talisman called the Double Eye, only to have it taken away from him by the merchant, who then gives him a beating, Abu breaks free and goes on a rampage. Seeing what’s going on, the Arab’s other slaves join in the rebellion, and the result is a brutal bloodbath during a party at the merchant’s house.

I don’t know if Robert E. Howard ever read this story, but it’s certainly possible. In the opening chapters, Abu is very reminiscent of Conan and other Howard heroes as he wreaks havoc on his enemies and leads a rebellion against the rich, powerful, and evil masters of the unnamed African nation where the story takes place. There’s slaughter right and left for a while, but then Abu emerges victorious and has to deal with ruling an unexpected kingdom while also trying to expand it. There’s also the matter of Khadija, the beautiful blond prisoner who was supposed to be the bride of the overthrown Arab merchant. She and Abu fall in love at first sight, but Abu has sworn a vow of poverty, sobriety, and chastity until he has spread his empire over the entire world and freed all the slaves everywhere.

Well, you know that’s not going to work out.

From that point, the story’s pace slows down considerably, but it never loses the reader’s interest. Long-time pulpster Sheehan packs in enough political intrigue, African mysticism, unrequited romance, and inevitable tragedy to keep things percolating nicely. Eventually, the British authorities get wind of what’s going on and send warships steaming toward the African coast to deal with the rebellion. The action heats up again, and everything leads to a powerful, if somewhat puzzling, ending.

As you’d expect from a story published 95 years ago, the writing is a little old-fashioned in places, but a lot of it is surprisingly terse and modern. There’s also some of the casual racism of the time period, although it’s not as prevalent as you might expect. Still, you should be aware of it if you’re considering reading this story.

Which you can do without having to hunt up six issues of an obscure pulp magazine published in 1915, thanks to Beb Books, which has it scheduled for an upcoming reprint. ABU, THE DAWN-MAKER is an entertaining blend of action and epic drama that often reads more like a mainstream historical novel than a blood ‘n’ thunder pulp yarn. If you’re the type of reader who can put your mind in early 20th Century mode, there’s a good chance you’ll enjoy it, too.
Posted by James Reasoner at 7:30 AM

Early 20th century seems pretty relaxing about now. Despite a war, that is.

I believe ALL-STORY CAVALIER WEEKLY was a short-lived merging of two Munsey pulps, ALL-STORY and CAVALIER. Without looking it up, I think CAVALIER was soon dropped from the title and the magazine became just ALL-STORY again, before eventually merging with ARGOSY.

Or I could be all wrong about that. Somebody reading this knows for sure, though, I can guarantee that.

For a time Munsey was publishing Argosy, The All-Story and Cavalier magazines simultaneously though at different frequencies. If memory serves, Cavalier went weekly while the other two remained monthly. After a time Munsey decided they needed to consolidate magazines so they merged The All-Story With Cavalier Weekly, retaining All-Story's volume and numbering, adding Cavalier Weekly to the title and made the whole thing a weekly. After about a year Cavalier was struck from the title so it ran as All-Story Weekly. More years passed and again Mnsey decided to consolidate magazines, this time merging ASW with Argosy, renaming the result Argosy All-Story Weekly and keeping Argosy's volume and numbering. Argosy was already a weekly at the time so there was no change there. Looking back, the editor of Cavaliar and All-Story was a much more gifted editior than the guy at Argosy. All-Story brought is Burroughs, Cummings, Stilson, Sheehan, George Allan England and muc more.