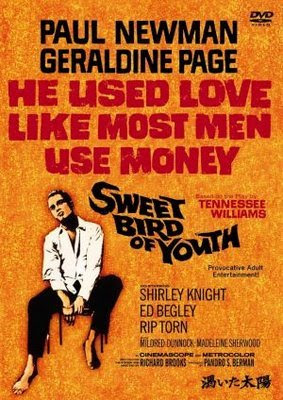 Livia’s working on a book with a Tennessee Williams connection, so we decided to watch some of the movies based on Williams’ plays that we’d either never seen before or hadn’t seen in a long time. So you can expect more posts like this over the next few weeks.

I’m certain I’d never seen SWEET BIRD OF YOUTH before. It came out several years after CAT ON A HOT TIN ROOF (my favorite Williams film so far) and also stars Paul Newman. No Elizabeth Taylor this time, though. It was also written for the screen and directed by Richard Brooks, who did CAT. In this one Newman plays a young man named Chance Wayne, a would-be actor who has failed at every turn. He returns to his hometown in Mississippi with an aging actress, Alexandra Del Lago (Geraldine Page), he met in Palm Beach, and Chance is convinced she’s going to be his ticket to fame and fortune. Along the way, though, he wants to be reunited with his former girlfriend, who happens to be the daughter of a powerful, corrupt politician named Boss Finley (Ed Begley in a performance that won a Best Supporting Actor Oscar), who also has an evil son who hates Chance.

Lots of possibilities there for lurid, overheated drama, and the movie takes advantage of most of them. I kept thinking that if this was a novel and the corrupt politician wound up dead about 40 pages in and Chance was blamed for the murder, this would be a Gold Medal by Harry Whittington or another Williams (Charles), or possibly Gil Brewer or Day Keene. But since it’s based on a Tennessee Williams play, that doesn’t happen. Instead everybody lashes everybody else half to death with impassioned speeches for a couple of hours. That sounds more critical than I mean for it to. It’s just that with Williams, you know going in you’re going to get characters who are going through a lot of raw emotional torture. And although some of it comes across as a little hokey and over-the-top now, most of it works.

Nobody was ever better than Paul Newman at playing a thoroughly unsympathetic cad that you wind up rooting for anyway, and he does his usual fine job in this film. Geraldine Page is also pretty good as the actress who fears that her comeback film is a flop. Ed Begley chews the scenery a little too much for my taste as Boss Finley, but Rip Torn is pure evil as his son. Shirley Knight, as Chance’s former girlfriend, isn’t given much to do, but she looks good doing it.

This is a really bleak film with a studio-mandated ending that’s not really happy but at least somewhat hopeful, an ending that Williams and Brooks both disliked. I thought it worked all right, though, and without it the movie might have been too overpoweringly grim. Even as it is, it’s hard to say that I actually enjoyed it. I admired it, though, and think it’s a pretty good film. I’m not sure how I missed seeing it in the past 40-some-odd years, though. It must have played on TV dozens of times when I was growing up. Oh, well, that’s why this series of posts is called Movies I’ve Missed (Until Now).
Posted by James Reasoner at 1:55 PM

Saw this as a play a few years ago and thought, hey the movie didn't end like this.

Did you ever see The Fugitive Kind?

It very much has that strange, trippy Williams type of poetic language. Brando plays his usual role of Corruption-(or Nazism, or waterfront mobsters, or any type of bad men doing bad things)is-all-around-me-yet-somehow-I-retain-a-pure-and-innocent heart. I think Brando is a fraud and I think most of the movies he did after the mid-50's were just for the money and to go to visit the foreign country they were going to. I think only in "The Men" and "Streetcar" did he play characters from the inside out, as opposed to his other movies where he was looking from the outside in, more impersonating the character than being it.
That doesn't mean he's unintersting. It's always fun to see what kind of acting tricks and other things he's going to throw at the camera.

But then, the same could be said of Jerry Lewis, heh heh.

End of rant. This message will self-destruct in five seconds.

Oh, I almost forgot. One of the coolest and most surprising things about The Fugitive Kind (from Williams's Orpheus Descending) is that Victor Jory (who played THE SHADOW in the 40's movie serial) is in it.

No, I haven't seen THE FUGITIVE KIND, but I've got it on my list now. I like most of Brando's films from the Fifties but not much after that other than THE GODFATHER.

In fact, I think they should have had Jerry Lewis play the Brando part and changed the title to "The Fugitive Kid". Then Victor Jory could have played The Shadow and could have swooped into the general store where Jerry was staying, and said: "XAVIER GLUCKMAN, I KNOW THAT YOU DO INDEED HAVE EVIL IN YOUR HEART. GAMBLING WITH THE OTHER KIDS BY PITCHING PENNIES AT THE SCHOOLROOM WALL. AND THEN THOSE WOMEN! YES, THE SHADOW KNOWS ABOUT THOSE WOMEN. THOSE GIRLS ON THE SCHOOLYARD. I SAW YOU BLUSH WHEN ESTHER KAPOPOVITZ WINKED AT YOU. IN KNOW WHAT WAS IN YOUR HEART. FURTHER, YOU ARE HEREBY JUDGED GUILY OF BAD ACTING, PRETENTIOUSNESS, ARROGANCE, SELF-RIGHTOUSNESS, AND JUST BEING AN ALL-AROUND STINKER. AND BY THE WAY, I COULD SAY THE SAME THING ABOUT MARLON BRANDO."

Double sorry, this'll really be the last one. I forgot my sign-off line:

After your description of this movie I know why I haven't seen in in over 40 years.... active avoidance. I sounds like a real downer of a flick. As for your suggestion that it must have been on TV dozens of times over the years... I wonder if that's true. It doesn't sound like a movie that would pull in a lot of audience, Paul Newman's blue eyes or not.