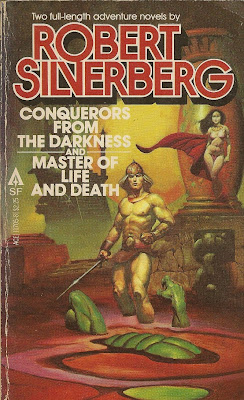 I’m writing about another science fiction novel this week, although of somewhat more recent vintage than last week’s THE GIRL IN THE GOLDEN ATOM. As author Robert Silverberg explains in his introduction to the 1979 Ace reprint of CONQUERORS FROM THE DARKNESS, the story first saw life as a novella, “Spawn of the Deadly Sea”, in the April 1957 issue of the SF digest SCIENCE FICTION ADVENTURES. (I’d be willing to bet that at least one reader of this blog owns a copy of that particular digest magazine.) A few years later he expanded the story into a full-length novel that was published by Holt, reprinted in paperback by Dell, and then finally reprinted again by Ace in a double volume with Silverberg’s 1957 novel MASTER OF LIFE AND DEATH (which I’ll probably read and comment on eventually). That’s the edition I read. As far as I know, it hasn’t been reprinted since.

CONQUERORS FROM THE DARKNESS is exactly the sort of vivid, galloping action yarn that made me a science fiction fan in the first place. At first it seems like a heroic fantasy novel, set in some totally different universe than ours. The oceans cover the entire planet except for a fe 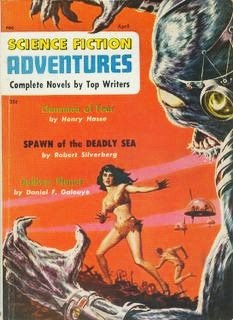 w floating cities. The only commerce is between those cities, and keeping the seas safe for the merchant vessels is a Viking-like group known as the Sea-Lords. The hero of the novel, a young man named Dovirr, lives in one of the cities but wants to be a Sea-Lord and take to the oceans. He gets his wish and rapidly rises in the ranks, and along the way the reader learns that this is indeed Earth, a thousand years after alien invaders flooded the planet for reasons known only to them, preserving a little of humanity in those floating cities. After a while, the aliens abandoned Earth, also for reasons unknown, leaving it in a vaguely medieval state except for a few remnants of the alien technology that still works.

You’d think that that background, along with Dovirr’s life among the Sea-Lords and his ascent to a position of power among them, might be enough material for a novel, but if you’ve read many books like this, the twist about halfway through won’t come as any surprise: the alien Star Beasts return to take over the planet again, and Dovirr and his comrades have to find some way to stop them with swords and sailing ships.

I really enjoyed this book. In his introduction, Silverberg mentions reading the work of Robert E. Howard, and I can see some Howardian influence in CONQUERORS FROM THE DARKNESS, most notably in the way Dovirr manages to seize command of every situation in which he finds himself, much like Conan, and in a very Howard-like final line. The pace is fast, the writing colorful, and the inner 14-year-old in me just loved it. The adult reader in me thought some parts of the story could have been developed a little more and a little better, but hey, adult readers weren’t the target audience for this yarn in the first place. I really like a lot of Silverberg’s early SF (as well as the sort-core sleaze novels he wrote as Don Elliott), and if you want to settle back and have a fine time, I highly recommend CONQUERORS FROM THE DARKNESS.

Posted by James Reasoner at 7:56 AM

I am the proud owner of several issues of Sf Adventures including the one you referenced. I bought all the action adventure magazines--Amazing, Fantastic, Imagination and Imaginative Tales--but to me SF Adventures was the class act. That was because the editor Larry Shaw was a class act. Great post, James.

I, too, was a big fan of SFA. Not to mention its sister publication, INFINITY, also edited by Shaw. I'm going to drag out that issue and read the yarn again after 50 years. Or maybe I'll see if I have the Ace edition.

I haven't read any Silverberg. Man! I'm so deficient on my classic SF reading. Just reading this review makes me 14 again. I'm putting this one on my wallet list. There's a used bookstore near my office - Book World - which boasts a large SF collection. Might stop by soon and see if this one is there.

Yes, Yes, Yes! This was also one of my earliest SF readings and man was it fun. I read a library copy. I also liked his "Time of the Great Freeze" as well, although "Conquerors" was better.

You know, HAWKSBILL STATION, one of the first of the "sdult" Silverberg sf novels, was also one of the earliest sdult sf novels I read, when about twelve (I started reading the adult short fiction earlier)...and that SF ADVENTURES issue does include a late Henry Hasse and a Daniel Galouye, if I make that out correctly...and I think I might have a copy of that issue. Sadly, it turns out that that era was the beginning of a rather freefloating contempt for Larry Shaw, whose whole career was one of fighting with tiny budgets and shady publishers, much like Robert Lowndes's, only for some reason Shaw was seen as being more under the thumb of the likes of James Quinn during his years at IF. Perhaps he was...I certainly wasn't around to draw firsthand conclusions. Shaw was lucky enough to be companion of (Ms.) Lee Hoffman for a number of years.

By the way, Bill Crider provided the cover scan for that issue of SCIENCE FICTION ADVENTURES. Thanks, Bill!

Ed, I used to have several SF digests from that era that had letters from you in the letter columns. One more reason to search them out, along with the great stories. Larry Shaw edited MSMM very briefly in the early Eighties, but I never had any contact with him.

You should definitely read some Silverberg. Personally, I prefer his earlier stuff, but that's just good old pulp-influenced me. Everything I've read by him was worth reading, though, no matter which part of his career it comes from.

James: Thanks for the information. It seems as if no matter how many (hundreds) of science fiction stories and novels I've read, there are so many I've not had the opportunity to read. So many books, so little time. Still, all of the great stories are why I became a science fiction author. Check out my first and recently released novel, Long Journey to Rneadal. This exciting tale is a romantic action adventure in space and is more about the characters than the technology.

Todd mentions the disrespect visited upon Larry Shaw when Infinity (a truly GREAT magazine) and SF Adventures folded. I was pissed off then and am pissed off now about all the morons who attacked him. He was a thoroughly professional editor with skills--at that time--matched only by Cele Goldsmith who bought first stories by Disch, Zelazny and many others. Times were hard. Shaw worked to put food on the table. If that meant soft core then so be it. Nothing he did took away from his essential decency as a man or his integrity as an editor.

I am pretty sure I saw a stack of these at an antique store last week-should have picked them up--at least for one of you if not me.

And such as MONSTERS AND THINGS, his shortlived FAMOUS MONSTERS imitation, weren't even softcore, just a bit more cheesecake than Ackerman and Warren's. And I'm thinking of how Shaw all but ended his career with Lancer, that most combustible of paperback publishers...many not as mobbed up as Manor Books apparently was, if I have it straight, but still pretty fast and loose and then bankrupt.

And apparently he was getting that hassle even before INFINITY and all, when he was at IF, where there was some question of James Quinn, who mostly was a puzzle magazine publisher, was also apparently a ridiculous martinet to whom Shaw acquiesced as much as he could stand to. Yes, I have to wonder how that was much different from the excrement others had to eat. Shaw, if Asimov's joking description is to be believed, wasn't much of one to defend himself, so perhaps he was an easy target for ingroup bullies aside from his publishers.

Try a few, Patti...particularly of the better magazines. (Recommendations likely to spill as the brightness falls from the air.)