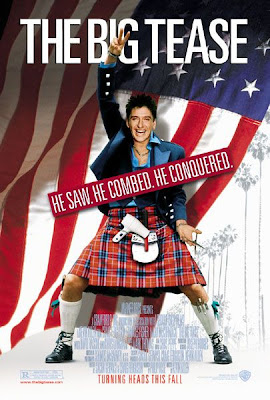 I’ve never been much on “mockumentaries”, although I’ve seen some that were pretty entertaining, like A MIGHTY WIND. One of my daughters is a fan of Craig Ferguson, though, and she picked up a copy of THE BIG TEASE, a movie Ferguson co-wrote and starred in ten years ago (which I think is the approximate cut-off point for these Movies I’ve Missed posts – they have to be at least ten years old). It’s supposed to be a documentary about Crawford McKenzie (Ferguson), a Glasgow hairdresser who’s been invited to Los Angeles for the prestigious Platinum Scissors competition, a “hair-off” for world-famous stylists. With a camera crew following him around, Crawford embarks on a series of adventures and misadventures in L.A. when he finds out that he’s not actually supposed to compete after all. He was just invited to be a member of the audience. But he’s determined not to let his friends and family down, so he tries to find a way into the competition, no matter what it takes.

I think Ferguson is a pretty funny guy, and he lives up to that here. THE BIG TEASE was made when he was a regular cast member on THE DREW CAREY SHOW (a series I always enjoyed, even in its later years when ABC was just burning off the episodes during the summer, and out of order at that). Carey shows up playing himself in this movie, and there’s an excellent supporting cast including Charles Napier, David Rasche, and Frances Fisher (who was once police detective Debra Saxon on the great hardboiled mystery soap opera, THE EDGE OF NIGHT). I laughed quite a bit and got caught up in the story. THE BIG TEASE is silly, no doubt about that, but it works and I enjoyed it. If you haven’t seen it, I think it’s well worth watching.
Posted by James Reasoner at 9:41 AM

I'm grateful to you for posting these --I've never heard of this movie! Sounds like fun.

You said the magic words of "David Rasche". I loved him on Sledge Hammer, so I'm going to have to check this out.
Thanks for the information.

Anything with Charles Napier has to be a winner.

If You liked this, check out Ferguson's other two movies " Saving Grace " which is about a lady who's ruined financially and turns to her Gardner, played by Ferguson to start a large scale Pot Cultivation to pay the bills and I'll be there, in which Ferguson plays a burnt out rock star who has to fix his life in order to help his daughter out.

All three are written by Ferguson, He got his Talk Show shortly after I'll be there came out.. so no more movies after that.

He also wrote a hilarious book " Between the Bridge and the River ".. which his descriptions of Duluth Georgia are so spot on I'm convinced hes been there before.