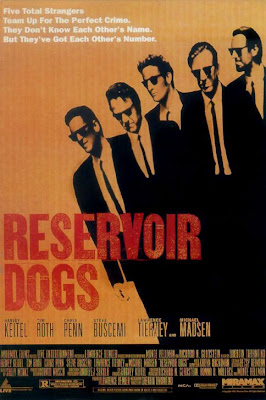 There are a lot of movies that most of you have seen already, but that, for one reason or another, I’ve missed along the way. I’ve written about some of them before, here on the blog, but I’m going to make it a semi-regular series, Movies I’ve Missed (Until Now). The first one up, which I watched last night: Quentin Tarantino’s RESERVOIR DOGS.

I admit, I haven’t seen much of Tarantino’s work. I liked the episode of CSI that he wrote and directed a few years ago, and I’ve seen PULP FICTION, which I thought was okay. But I like the episode of THE SIMPSONS that parodies PULP FICTION more than I like the movie itself. In fact, every time Tarantino has a bunch of guys sitting around talking about various oddball subjects (as he does in RESERVOIR DOGS, too), I keep hearing Chief Wiggum saying, “You know what they call a Krustyburger with cheese in France, Lou?”

Anyway, RESERVOIR DOGS. You’ve seen it: gang of professional criminals, botched diamond robbery, extremely bloody aftermath, broken up by the back-stories of some of the characters. Great cast. I was especially impressed with Lawrence Tierney and Harvey Keitel. The violence is effective, and so is the use of music. Love Steven Wright (one of my favorite comedians) as the DJ. Unfortunately, as I touched on above, all of Tarantino’s favorite bits have been parodied so much it’s hard to take them seriously. Still, I have to admire the guy. His work has a style and a voice of its own, and I like that. If I had seen RESERVOIR DOGS when it was new, it might have impressed me more. As it is, I liked it well enough to say that if, like me, you’ve never seen it before, you really ought to watch it.
Posted by James Reasoner at 12:58 PM

At the time, it blew me away. Now, with my revised opinion of the director as a spoiled twelve year old, I doubt it.

Superannuated smartass 17 year old, sure, who has used nearly the same structure on about five produced scripts now, if not more, but I, too, dug RD on first viewing, and still think it rather better than PULP FICTION (which is a bit like Tarantino cuting up a Lansdale story, one which didn't need the cuting) and vastly better than KILL BILL (as a unit). Good taste in import films, and slapping his name all over CHUNGKING EXPRESS on US video might even have helped it sell more than it turned off those put off by egomania. We can hope.

Reservoir Dogs is one of my least favorite of Quentin's films.... I don't have a problem with the movie as a whole but one of the actors bugs me - too whiny and annoying. It's been awhile since I've seen the movie but I can't remember which one. What did everyone think of Jackie Brown - his adaptation of Elmore Leonard's RUM PUNCH? I thought it was brilliant. I also recall he had bought the rights to several other books at the time. I hope he decides to do more.....

JACKIE BROWN is one I'd still like to see and will get around to eventually. KILL BILL, maybe, maybe not. Same with GRINDHOUSE.

reservoir dogs is actualy my favorite Tarantino movie. I was amazed and appalled by it, in a good way.

I saw this already in 1992 and was blown away. And I was blown away every time I saw it (even though I was able to see some of the weaknesses). The dialogue seemed refreshing and funny, the violence was very nicely done and effective, playing around with the time structure is done greatly and keeps the viewer on the edge of his/her seat.

I can understand how seeing KILL BILL and others can diminish the value of RESERVOIR DOGS. But not for me. I still think it's one of the best crime movies ever done.

I sat in the cinema-Richmond Film House - with a gin and tonic, nursing a hangover and thinking :"Someone has invaded my dreams'. I l've it dearly and I think jackie Brown and Kill bill 2 are equally wonderful.

This is probably my favorite Tarantino film, although I think PULP FICTION is objectively better. JACKIE BROWN left me cold for some reason, except for DeNiro's character. I didn't care for KILL BILL Vol1 but though Vol2 was brilliant.

And I'll be first in line for INGLORIOUS BASTERDS.

The reason why PULP FICTION is great is with the time structure. Try to make a timeline of what happened. There's also no focal point, the point in narration from which everything is else is being narrated, so nothing in the film is a backflash. Yet watching it you never realize you're being fed a totally avantgarde experience, you're only being entertained.

There's similar touch on DEATH PROOF, but I have yet to grasp what it exactly is - because the first hour of the film is pretty boring.

A guy named Q. Tarantino,
Made flicks not for the bambinos.
Fierce, violent, and raw.
Like an angry bear's paw.
Q.T. must take benzedrinoes.

Juri, that's my point...Tarantino starts in the middle and jumps in essentially the same way in each of his scripts, except when he can't (JACKIE BROWN doesn't quite allow the usual time changes). After the fourth iteration, it gets a bit familiar.

Yeah, Todd, but it still doesn't diminish the value of Pulp Fiction (or Reservoir Dogs). How could bad pieces of art of someone who's done better earlier make them seem bad? Steinbeck's early novels are bad, because his late novels were bad?

Juri, you misunderstand me...I'm saying that using the same structure over and over again saps the work of originality. Particularly if the use of that same structure gets to be as lazy as it is in KILL BILL.