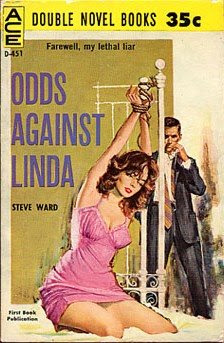 Like Ross Laurence’s THE FAST BUCK, which I also wrote about a while back as a Forgotten Book, Steve Ward’s ODDS AGAINST LINDA (also published as half of an Ace Double, like THE FAST BUCK) seems to be the only book Ward ever published, at least under that name. The writing is good enough, and the name so generic, that I have to wonder if Ward is a pseudonym.

The narrator of this novel is Peter Conrad, a Korean War vet who lost a leg in that conflict. Following the war, he moved to Mexico to make a living as a commercial artist, but as the book opens, he’s returning to San Francisco with his new wife Linda. Before he even gets out of the airport, though, he gets knocked out, kidnapped, and Linda disappears. From there on, Things Get Worse. Soon enough, Pete’s on the run, charged with a murder he didn’t commit, and as he himself notes, a guy with one leg can’t do much running.

This is a short novel (107 pages), but the author packs in a lot of stuff: a piano-playing dwarf, beautiful strippers, double identities, gunplay, brutal fistfights, torture, truth serum . . . You get the idea. Halfway through, there are two big twists, one of which you’ll see coming. But the other you might not. I didn’t. The whole plot is familiar enough that you’ll probably have a pretty good idea where the author is going, but he throws in enough oddball notes along the way and the writing is smooth enough so that I found reading the novel a fast, very entertaining experience. Highly recommended if you run across a copy of it.

But I’d still like to know if Steve Ward was really somebody else.

Anything with a piano playing dwarf is a hit with me,

I trust Pat. He's pretty accurate most of the time. An ABE search turns up SILENCED WITNESS by Norman Rosenthal, half of an Ace Double from 1955 (along with THE DANGLING CARROT by Day Keene). There are also a lot of non-fiction books, some of them fairly recent, by Norman Rosenthal, but I'm betting it's not the same guy. But who knows?

That's funny. Who is Norman Rosenthal sounds like a great title.

107 pages! Wow. Bet "Ward" just knocked this out in a week. I'm a man for details and, I have to admit, that cover is uber sexy. The woman looks like she doesn't mind being tied up. And any story that has a twist you can't see coming, James, is a novel I need to read.