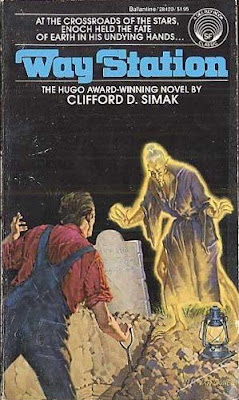 Tucked away in an isolated corner of Wisconsin farmland is an old house that dates from before the Civil War, but it’s strangely unchanged in all that time. So is the man who lives there, Enoch Wallace, who fought with the Union Army in that conflict and is now still alive more than a hundred years later and apparently not much older than when he fought at Gettysburg. Enoch’s secret is that inside the house is an intergalactic transport apparatus, and he’s the keeper of Galactic Central’s way station on Earth.

That’s the set-up of Clifford D. Simak’s Hugo-winning novel WAY STATION, first published in 1963 and reprinted several times since. Simak was a veteran of the science fiction pulps dating back to before what’s now considered the Golden Age of those magazines, and as the pulps faded he made a seamless transition to writing well-received hardback SF novels. Although he wrote some Western stories for the pulps and later dabbled in fantasy novels as well, he’s best remembered for what some have called pastoral SF – stories and novels usually taking place in rural settings, with low-key, somewhat unsophisticated (at least on the surface) protagonists. WAY STATION fits neatly into that sub-category and may well be the best example of it I’ve encountered.

Simak was never a flashy writer. His prose style is functional and plain-spoken, like the people he writes about. In WAY STATION, the story unfolds in a gentle, leisurely fashion, with the main elements of the plot never really getting into gear until about halfway through the book. Most writers today couldn’t get away with that, but Simak makes it work. And once things do start rolling, the scope of the story rapidly expands, with the fate of entire galaxies ultimately at stake, even though all the action takes place here on Earth.

When I was younger, I read a number of Simak’s novels, and while I enjoyed them, he was never a particular favorite of mine. I think maybe I just wasn’t ready to appreciate his virtues. WAY STATION is a fine novel and has dated hardly at all. I plan to read more of his work soon.
Posted by James Reasoner at 12:13 AM

Good one. I read this a bunch of years ago.

That sure looks like Robert Mitchum from the back.

Simak's been a favorite of mine for more than 50 years.

I've read and enjoyed several Simak novels but never managed to catch this one. Sounds intersting.

I'm compiling a list of old-school SF writers/books to read this summer and this one just landed on The List.

Pastoral SF. Never heard of that genre. "...the story unfolds in a gentle, leisurely fashion, with the main elements of the plot never really getting into gear until about halfway through the book." I think this kind of writing gets short shrift nowadays when we writer are supposed to wow a reader with the first sentence/paragraph. I like to think the reader is intelligent enough to stick with a story if he enjoys it.

I've been meaning to read Simak's TIME AND AGAIN (as opposed to Jack Finney's, who in some modes wasn't too different) for years, and still haven't.

But at least I have read CITY, which in a gentle way blew some minds in the 1940s as the component stories were being published.

Simek was a newspaperman, an editor I think, not a reporter, so he had a lot of practice writing. He lived, I think, in Minnesota and had a Lake Woebegone sort of take to his fiction that Keillor realized years later. He wrote some early super-science stories -- Ring Around the Sun, Cosmic Engineers -- but is best know for his later works, like Way Station and City.

WAY STATION is my favorite Simak novel--and he wrote some great ones.

I want to read this. Its plot is very interesting because of that combination of elements like Civil War, intergalactic stuff, etc. Buy Viagra Viagra

Thank you! I didn't know they picked up on it until I saw your comment.