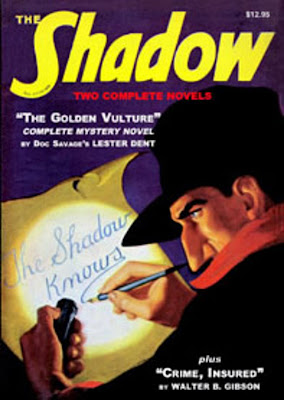 Originally published in the July 1, 1937 issue of the long-running pulp magazine THE SHADOW, “Crime, Insured” was the choice to lead off the series of reprints being published by Nostalgia Ventures for the past few years. These are really handsome trade paperbacks approximately the same size as a pulp that reprint two Shadow novels in each volume.

My history with The Shadow goes back to the early Sixties, when episodes from the old-time radio show were syndicated to local stations across the country. One of the stations in my area began airing them, along with episodes of THE LONE RANGER, THE GREEN HORNET, and GANGBUSTERS, in a block from ten o’clock until midnight every night. I had a combination AM radio/reading light that attached to the headboard of my bed, so I would turn the volume real low and listen to those old radio shows while I was supposed to be sleeping. I enjoyed all of them, although, to be honest, THE LONE RANGER was my favorite.

Then in 1964, I bought a paperback called THE SHADOW STRIKES off the spinner rack at Tompkins’ Drugstore, realizing this was the same character. At the time, I didn’t know anything about the pulps, but I really liked this book, which was written by somebody named Maxwell Grant. Of course, it was actually written by Dennis Lynds, as were the original Shadow paperbacks that followed it for the next few years, all of which I bought and read faithfully. Eventually I found out about the Shadow pulp novels, and about how that series of paperbacks that melded the pulp character with the secret agent boom that was going on came to be written. And the pulp novels themselves began to be reprinted by Bantam, beginning with the very first one from 1931, “The Living Shadow”. I read all the Bantam reprints and the even longer reprint series that came out a few years later from Pyramid/Jove/HBJ (many of them with covers by Jim Steranko). I read the ones that were reprinted by Doubleday in Crime Club editions, as well as the occasional odd reprint from other publishers. And of course, I acquired some of the actual pulps along the way and read them, too. Although The Shadow was never my favorite pulp character, I enjoyed the novels a lot.

So I’m glad to see some of them being reprinted again, including quite a few that I haven’t read. One of which was “Crime, Insured”. (You thought I was going to wander around in Nostalgia Land forever, didn’t you?) In this yarn, an insurance magnate has come up with a new idea: he’ll insure the schemes of various big-shot crooks in New York, so that if they fail to collect the loot they’re after, the insurance company will pay off that amount. If the crooks succeed, the company gets a ten per cent premium. Naturally, The Shadow gets wind of this scheme and sets out to destroy it with the help of his various agents. And that leads to something that hadn’t happened up to that point in the series. The bad guys fight back and discover most of The Shadow’s secrets, including the identities of his agents, the fact that he poses as Lamont Cranston (he’s not really Lamont Cranston, no matter what the radio show and the later novels said; trust me on this if you don’t know the story already), and even the location of his secret sanctum where he plans out his war on crime.

Many Shadow fans regard “Crime, Insured” as the best novel in the entire series. I wouldn’t go that far myself. The underlying scheme is just too pedestrian, and I’ve read numerous Shadow novels that I enjoyed more. However, I understand why it’s a fan favorite: it has a huge, over-the-top action sequence in which the villains capture all The Shadow’s agents and invade his sanctum for an epic battle. This is Walter B. Gibson (the original “Maxwell Grant” and the author of nearly 300 Shadow pulp novels) at his best, and it’s a great scene. There’s also a tie-in with an earlier Shadow novel, “The Black Hush”, which is one of my favorites in the series.

If you’ve never read a Shadow novel before, I’m not sure I’d recommend “Crime, Insured” as the best place to start, even though most of the supporting cast appears and there are those great action scenes. But if you’re a fan of the series and haven’t read this one yet, you definitely need to.

The other novel reprinted in this volume is “The Golden Vulture”, which was written by Lester Dent as a try-out for the Doc Savage series and then not published until five years later, when it was extensively revised by Gibson. There’s also an interesting article about how all this came about by pulp authority Will Murray. I read “The Golden Vulture” just a few years ago in the original pulp, so I’m not going to reread it any time soon, but I recall that I enjoyed it quite a bit. All in all, this was a fine way to launch the Shadow reprint series, and I hope to read more of these volumes soon.

Email ThisBlogThis!Share to TwitterShare to FacebookShare to Pinterest
Labels: mystery fiction, The Shadow, Walter B. Gibson

Good history, James. Thanks. I'm currently reading Shadow #1, "The Living shadow." Makes me now want to blaze through it. I just picked up one of the reprints that features the story that led to the first Batman story.

Well, there's another little background we share, James. I was teaching high school in Corsicana, and every night I'd read and listen to those old radio shows. No wonder it was hard for me to get up for school the next morning. I'd heard a lot of the shows on radio when I was a kid, so it was an exercise in nostalgia for me, even then.

There's a cool Shadow podcast available for free on Itunes

I just received an order from Nostalgia in the mail today. It was supposed to be 23 & 24 of The Shadow, though a screw-up gave me Doc Savage 23 instead.
Not that displeased, although I do have most of the Bantam reprints, as well as the new ones added to the set.

I've got a bunch of Shadow novels from the public domain from Gutenberg. Some are very good. Others not so much.

The Shadow has always been a bit too gothic for me; I prefer the gee-whiz air of Doc Savage.

Incidentally, THE GOLDEN VULTURE was a major plot point in the excellent novel THE CHINATOWN DEATH-CLOUD PERIL from a couple of years ago.

I'll bet you listened to those radio shows on KRLD out of Dallas, didn't you?

That was the station, James. I'd lie there reading the latest Donald Hamilton novel and listen to those shows. Those were the days.

Charles, I agree with you about the novels. I've read a couple of real stinkers in the series.

My parents had cassettes of old radio shows and we'd listen to them when we drove to Tyler to see my grandparents. I always loved The Shadow and Abbott and Costello. Then, in 1987 and 1988, when I was driving back home to UT on a Sunday evening, KTRH (Houston) would broadcast many old radio shows and it would last at least until Columbus. My favorite thing about old radio shows were the ingenious use of sound to evoke images in your head. Still love radio and dig The Prairie Home Companion nearly every Saturday.

Most of the Shadow novels from the Forties range from mediocre to poor. The really good ones are few and far between. The ones from the Thirties are generally better, although you'll find some stinkers there, too.

Old radio shows are great for road trips. I used to have a bunch of Shadow episodes on cassette that I listened to when I had to travel. I don't think I ever heard any Abbott & Costello radio shows, but I love their movies.

Didn't the famous Who's on first base sketch come from a skit on the abbot and costello radio show?

The "Who's on first" routine came from vaudeville and burlesque shows, where variations of it existed as far back as the turn of the Twentieth Century. But Abbott & Costello certainly perfected it and included it in their burlesque act before performing it on Kate Smith's radio show in 1936. (So sayeth Wikipedia.)