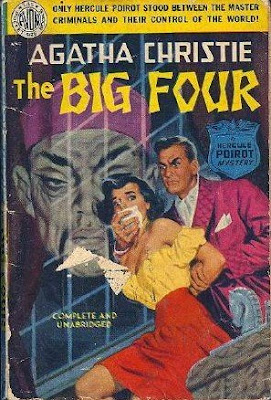 I recently got the urge to read an Agatha Christie novel, an impulse that comes over me from time to time. When I was a kid, I read a lot of Christie novels, the first one being THE BODY IN THE LIBRARY, which I checked out of the school library when I was in the sixth grade. This was back during the days before the balkanization of mystery fandom, when you could read Agatha Christie one day and Mickey Spillane the next and never think anything about it.

Anyway, the book I picked up was THE BIG FOUR, a novel I’d seen mentioned every now and then on the Golden Age of Detection Yahoo group. I knew it was something of an oddity for Christie, not really a straight murder mystery like most of her other books but rather an attempt to write an Edgar Wallace-style thriller. (I say that having never read an Edgar Wallace book myself, you understand, but I seem to remember that from the GAD group.) The plot finds Christie’s most famous detective, Hercule Poirot, facing off against a group of international criminal masterminds, the Big Four of the title. They’re led by Li Chang Yen (a brilliant, sinister Chinaman . . . wonder where Christie got that idea . . . what do you think, Sir Denis Nayland Smith?), and their ranks include an American, a French woman, and the assassin of the group, the mysterious Number Four, a master of disguise who might be anybody. Accompanied by narrator and faithful companion Captain Hastings, Poirot foils half a dozen or so plots by the Big Four in this episodic novel (something else it has in common with the early Fu Manchu books) before finally having a big showdown with them.

I really have to wonder if Ian Fleming ever read this novel, because some of the bizarre assassination methods, as well as the villains’ death ray and their secret stronghold inside a mountain, really reminded me of the James Bond books. Well, probably the movies more than the books, now that I think about it. But for a book originally published in 1927, there’s a lot of stuff that showed up later during the secret agent boom in the Sixties.

Despite the fact that there are elements here I like, I’m not sure the book ever really works. Christie just doesn’t seem suited for global-scale action-adventure. The writing seems rushed in places, but at the same time, there’s never really much sense of urgency. And even though stuff Blows Up Real Good, there’s no real sense of that, either. Still, I enjoyed THE BIG FOUR overall. Several of the individual cases that make up the larger story arc are interesting and well-plotted. Poirot is, well, Poirot, even when he’s taking on antagonists more suited for James Bond. Captain Hastings is as dense as ever, and whether you find that endearing or annoying is up to the individual reader. This seems to be regarded as one of Christie’s worst books, and I can understand why. So if you haven’t read her work before, this isn’t the place to start. But it’s still a pleasant enough way to spend some time if your expectations aren’t too high.

Posted by James Reasoner at 6:42 PM

Always been afraid to reread someone I loved so much for years. Kerrie Smith is rereading her whole body of work right now. But she reads a book a day.

Having read The Big Four - well, any comment that I could make has already been covered by you.
It's not really a Poirot book - he seems to be both out of place and, at times, out of his depth. Certainly, it should have been written to go with Agatha's other stand alones.
Perhaps, without Poirot it would have been regarded differently.

I agree, the book probably would have been better as a stand-alone. Even then, though, I'm not sure Christie could have handled the over-the-top action a book of this sort really needs.

Not read any Agatha Christie for years and years - think the first I ever read was Lord Edgware. There are some nice retro looking new hardback editions out that I've been fancying for awhile. Think your post has given me the prompt I needed to buy one or two. My bank manager says , thank you very much.

Is that Poirot on the cover? Or Hastings?

I don't recall that scene even being in the book. But the guy's clearly not Poirot, so it must be Hastings.

personaly, i rather liked the book.

Really??? You rather liked this book? "There's good reason to suppose that he's the man behind it all. The world-wide unrest, the labour troubles that best every nation, and the revolutions that break out in some." And then later, "we know him, as it were, only by the impress of his mind—and in passing, Hastings, I will tell you that I begin to understand that mind very well—a mind most subtle and Oriental—every scheme and plot that we have encountered have emanated from the brain of Li Chang Yen." This doesn't strike you as febrile conspiracy theory and outdated Colonial racism? Curious.

Hi! Just found your old blog post about this book and enjoyed your perspective. I re-read The Big Four on the weekend and enjoyed it for what it was - a book of its time, by a writer who is better suited to writing contained stories rather than big sprawling epics involving international intrigue. But I find it pretty easy to forgive the weaknesses in the story. The main thing I actually thought was odd was I don't quite get what kind of marriage Hastings has that he just goes and hangs out with Poirot for a full year and doesn't seem to communicate with his wife at all!