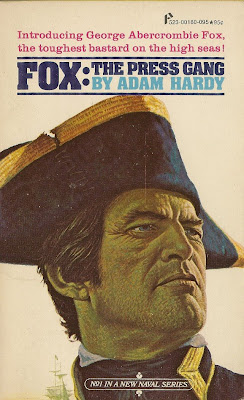 I’ve never been a big fan of naval historical fiction. I’ve read some of the Horatio Hornblower novels by C.S. Forester and the occasional stand-alone. I’ve even written some fairly extensive naval sequences in various historical novels, but it took a lot of research because I’m not a sailor. I am a paperback junkie, however, so when I was in Half Price Books recently and saw that they had all eleven books in the Fox series, published by Pinnacle in the mid-Seventies, for a very reasonable price . . . Well, you know what I did. I bought them. I used to own this series but never got around to reading any of the books.

Now I’ve read the first one, THE PRESS GANG, and I enjoyed it quite a bit. George Abercrombie Fox is not your typical clean-cut naval adventure hero. A product of London’s slums, he started out as a powder monkey when he was just a boy and has risen in the ranks until he’s the second lieutenant on the British frigate Tigress in 1800, fighting the French. Fox is a morally conflicted anti-hero, capable of brutality and violence but still possessing a certain amount of sympathy for the men who serve below-decks in the British navy. He also has an odd physical quirk: in moments of high stress, he goes blind in one eye.

The plot of this novel meanders along. The Tigress gets in battles with French ships, and then lands an English spy on the coast of France in the dark of night, and then Fox has to help put down a mutiny . . . but then part of the way through, the story takes a twist I hadn’t expected and the pace picks up. The action scenes are well-done, although some of them include so much sailing jargon that they’re almost gibberish to me. There’s plenty of cutlass-swinging and decks awash with blood when the action takes place in closer quarters, though. The main appeal is the character of George Abercrombie Fox, who somehow comes across as likable despite his often unsympathetic actions. He’s hell on wheels in a fight, that’s for sure.

The author, Adam Hardy, was really veteran British paperbacker Kenneth Bulmer, who is best known for his numerous science fiction novels dating back to the early Fifties. He wrote many historical novels as well, under various pseudonyms. His career was roughly contemporary with those of the Piccadilly Cowboys, a group of British authors who wrote scores of Western novels during the Sixties and Seventies, and Bulmer, in fact, wrote one Western, an entry in the Jubal Cade series under the house-name Charles R. Pike. Fox reminds me very much of the anti-heroes so common in the British Westerns, the same sort of variation on the typical naval adventure hero that, say, Edge was on the traditional Western hero. I wouldn’t say that THE PRESS GANG is for everybody, but I enjoyed it, and I’m glad I have the rest of the books in the series. I may even read them. (One historical note: the Fox series was published originally by New English Library, and there are fourteen volumes as published by NEL. Pinnacle Books published only eleven of them in the U.S. As to whether I’ll seek out the books published only in England . . . well, I’ll have to wait until I’ve read the others and see how well I like them, I guess.)
Posted by James Reasoner at 9:54 AM

Great review James of a series I've often wondered about buying but never got around to doing so. Reckon I might just take the plunge as it's good to read something that aint a western every now and again.

Now that's a granite face. Thanks.

So you've gone me one better and I actually try to collect Bulmer. I've only gotten one of the Hardy books but will have to check halfprice books online about the rest of them. I have the Jubal CAde that Bulmer did and it's OK. I'm mainly a fan of his fantasy stuff.

That's a great cover and the plot sounds very entertaining. I have tried to read historical naval adventures before but I get hung up on the old language.

Isn't it great when you come across an old series like this. I spend half my life in secondhand book shops.

"The toughest bastard on the high seas"!
I remember reading that catch-phrase on the covers back in the day and wondering just how tough Fox really was.
Hard to imagine any series character appearing these days with a line like that on their cover.

We must be on the same wavelength as I began reading the Adam Hardy books over the last year. They are very gritty, enjoyable reads.

Even more interesting to me is the series Ken Bulmer wrote as Bruno Krauss featuring the exploits of World War II U-Boat commander Baldur Wolz. Originally published by Sphere Books in the UK, Zebra published many of them in the US.

What I found especially interesting is how Bulmer manages to hold reader interest and some sympathy in his "hero" as he goes about sinking Allied ships on behalf of Nazi Germany. And he doesn't cut corners. Bulmer even switches viewpoint from the U-Boat to often very sympathetic characters on the ships about to be torpedoed.

They are also very well researched as I learned when I checked on a few interesting tidbits, such as the one-man glider/kite U-Boats would sometimes send up to scan for enemy shipping.

The series is called Sea Wolf and the novels all have "Shark" in the titles such as STEEL SHARK, HARK NORTH, SHARK PACK, etc.

Thanks for the recommendation of Bulmer's Bruno Krauss books. I'll certainly look for them. Speaking of WWII fiction from the German point of view, I've run across several novels recently by Sven Hassel and have been tempted to pick them up, but have not yet done so. If anybody has anything to say about this series, pro or con, I'd appreciate hearing it.

I haven't read the first in the series, but I've read the entries as I've found 'em in bookstores, and I've enjoyed each one. You found the whole series at once?! Lucky man.

I bought the full set back in the 70s at discount Coles store in Toronto still have them . great books to start with on historical fiction