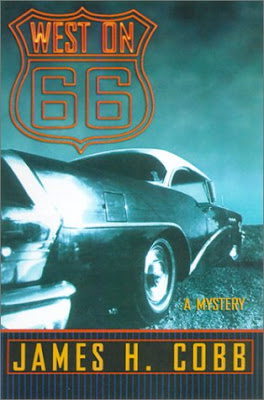 Take a Korean War vet who’s an LA county sheriff’s deputy in 1957, have him leave Chicago after visiting relatives and head back to California along Route 66 in a souped-up hot rod, drop him down in the middle of a mystery involving several murders, vengeful gangsters, a fortune in missing loot, and a beautiful young woman on the run, and what do you have? The ingredients of a vintage Gold Medal novel, right?

Nope. WEST ON 66 by James H. Cobb was published by St. Martin’s in 1999. I don’t know if it’s actually a forgotten book, but I’ve never heard or read anything about it, so that’s good enough for me. And the book itself is more than good enough. The plot is fairly complex, the pace races right along (as you’d expect in a book that features several fast cars), and the narrator/hero is extremely likable. The action scenes are very good; there’s a long, explosive scene near the end that’s just wonderful, so much so that it overshadows the rest of the book a little. While WEST ON 66 isn’t quite the pitch-perfect recreation of an era and a writing style that, say, Max Phillips’s FADE TO BLONDE is, it’s darned close to that level. My biggest complaint is that in a few places the author gets a shade too cute for my taste, such as when the hero is searching for a pay phone to make an important call and thinks that it sure would be handy if somebody invented a phone you could carry around in your pocket. I’m sure I do that myself sometimes, too.

I’m not a big reader of near-future techno-thrillers, but Cobb’s debut novel, CHOOSERS OF THE SLAIN, is great, probably the best novel I’ve ever read in that genre. It could almost qualify as a forgotten book itself, since I haven’t heard anyone mention it in years. It’s pretty easy to find and well worth looking for. So is the sequel, SEA STRIKE, which is almost as good. I imagine the other two or three books in the series are, too; I just haven’t gotten around to them yet. I’m glad I came across WEST ON 66, though. It’s one of the best books I’ve read this year.
Posted by James Reasoner at 8:35 AM

Thanks, James. The cover alone is seductive.

Because i love Hot rods and American Muscle Cars i really loved this book, James Cobb has written several short stories featuring the protagonist from this book, Kevin Pulaski as a young teenage Hot Rodder, most of them published in EQMM, one can be found online here: http://www2.ups.edu/arches/1999SummerFall/justice.htm
Maybe you James as some other recommendations of books featuring American Muscle Cars and Hot Rods?
Tomas/Sweden

Cool review, James. Thanks for the rec. I just checked our library. They have 3 (!) copies, and I place a hold on one. Max Phillips was on his top game in FADE. Loved it. I look forward to WEST ON 66.

Thanks for the info about the Pulaski stories. I'll definitely check out the one that's on-line. Sorry I can't help with other recommendations. This is probably the first book I've read featuring hot rods since CRASH CLUB by Henry Gregor Felson, which I read in high school many years ago.

Perhaps of interest, West on 66 has been included in a Humanities Council reading/discussion program in Oklahoma, which has more of Route 66 than most states. Other titles in the discussion series include Michael Wallis Route 66: The Mother Road and Route 66 Remembered by Michael Witzel. The places Cobb features, by the way (except Jubal's ghost town), are mostly actual, including the ghost lights of Quapaw. The book is quite popular with the library reading groups. Too bad the publisher didn't put the '57 Chevy on the cover--not Cobb's fault!