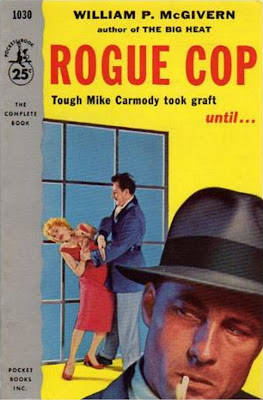 It was bound to happen sooner or later. Earlier this week, someone on another blog reviewed the Forgotten Book I was going to post about today. But I liked it enough that I’m going to write this post anyway. As a wise woman once told me, you can’t say enough about a good book.

William P. McGivern is one of those authors whose work I’ve been aware of for decades without ever reading much of it. I read his World War II novel, SOLDIERS OF ’44, which is part war novel (which works pretty well) and part military/legal thriller (which didn’t work, as far as I’m concerned). A few years ago I read his private eye novel BLONDES DIE HARD, written under the pseudonym Bill Peters, which I liked. You can read my comments on it here.

Now I’ve read his novel ROGUE COP, and it’s easily the best McGivern I’ve read so far. Philadelphia police detective Mike Carmody is the rogue cop of the title, up to his neck in graft and corruption. His younger brother Eddie is also a cop, but of the honest variety, and when Eddie winds up with the local mob after him, Mike has to take sides and choose whether to protect himself or his brother.

There’s probably not a lot in this book that will surprise the veteran reader of hardboiled thrillers, but boy, the pace really rockets along. McGivern’s prose is just as smooth as it can be, and he does a great job of creating rounded, morally conflicted characters, chief among them Mike Carmody himself. There are plenty of tough action scenes, and a great line near the end. I’ll definitely be seeking out more McGivern novels, and if you haven’t read ROGUE COP, it gets a high recommendation from me.

Posted by James Reasoner at 7:21 AM

I'm a sucker for book set in Philly. I'll pick it up.

With a cover as classic as this one, it's a crime not to read it. McGivern's name sounds familiar to me. I'll have to investigate where I might know him from. And I'm certainly curious about his WWII novel.

McGivern was one of the writers, probably the best of them, who clustered around Howard Browne and the Ziff-Davis fiction magazines of the late '40s and '50s...by the time that Browne finally severed his ties with Z-D in the mid '50s, WPM gave up writing deft if usually minor fantasies for FANTASTIC and focused on publishing stuff like ODDS AGAINST TOMORROW, which I still need to pick up. And he was The Philadelphia specialist, Patti...at least in his time. I'm not sure Duane S. would disagree that he still has some catching up to do.

There's almost always a scene in McGivern's books where the protagonist, conflicted as he may be, confronts the book's villain and lays down a blazingly righteous speech that's powerful enough to jolt the reader, and maybe even drive them out of the chair over to the phone to call a friend to read the dialogue to.
I haven't read a McGivern book in a long while, and your post really makes me want to change that.

I still need to read most of Goodis...did he actually set most of his work in Philly so named?

Sadly I know I have quite a number of McGiverns' paperbacks, but only remember reading two, "The Crooked Frame" and "Waterfront Cop." Good, dark, and gritty stuff! Sometimes you need someone to kick you in the ass to remind you how good somethings are. Thanks James.

McGivern was part of the staff of writers Ray palmer hired for Ziff-Davis. He wrote a lot of science fiction. The one or two peices I've read were god-awful. I was surprised to learn some time ago that McGivern had a successful career as a 50s mystery writer. Judging by his SF he couldn't write his way out of a paper bag, but it looks like he just hated SF.

I've read some of McGivern's pulp SF and fantasy stories. One novella in FANTASTIC ADVENTURES started out as a really gritty and good Cold War espionage yarn, but then the fantasy elements came into play and you could almost hear McGivern thinking, "God, I don't want to write this stuff." I think he was just much more comfortable with the crime and suspense stories.

I don't recall about Goodis's books, but I'm pretty sure McGivern never actually calls the city Philadelphia in ROGUE COP. But it's obvious that's what it is.

I've mostly read the later McGivern trifles in FANTASTIC and the FANTASTIC ADVENTURES issues under Browne, where fitfully the Regular Stable did some better work than they had previously, so as to not look too pathetic next to the Leibers and Blochs and St. Clairs. They are, as I mentioned, usually not too shabby, if not what he'd be remembered for. I can believe some of his earlier hack for Palmer was Dire. Certain a little of what I've read under his name, rather than St. Reynard, et al., for the later issues is less deft than his average...well, by necessity, of course...

Thanks for the memory scan, James (and for the recommendation). I have to wonder if the novella you cite was going along well, then needed to be finished in a hurry to fill a hole...or perhaps had to be rewritten for FA when MAMMOTH MYSTERY went under.

I didn't know much about William P McGivern before I read a short story in Alfred Hitchcock's "Tales Of Terror." The way the story moves and the wonderful language reminded me of a tommy gun shooting. It was hard to put down. I'm in the process of reading more of his material. Can't wait.