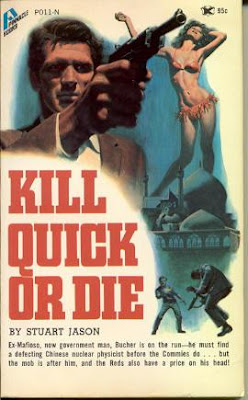 This is the first book in the Butcher series, one of the many men’s adventure series that sprang into being following the success of the Nick Carter and Executioner novels. The Butcher ran from 1970 to 1982, with a total of 35 books over that dozen years. The only ones from the series I’d ever read were the final nine, which were written by Michael Avallone under the Stuart Jason house-name. Avallone and I were corresponding regularly at the time, and there’s even a mention of me and my first novel TEXAS WIND in one of his later Butcher novels.

The origins of this series seem to owe something to the Daniel Port novels by Peter Rabe and the Sand novels by Ennis Willie. Bucher (I don’t think we ever get a first name for the character) is an orphan who is raised in a foundling home in Knoxville, Tennessee, becomes a member of the Mob as a young man, rises through the ranks to become a Syndicate big shot – then turns his back on his fellow gangsters and walks away, like Port and Sand. Naturally, the Mob vows vengeance on him and puts a bounty on his head, leading to numerous attempts on Bucher’s life and setting him up for a war against the Mafia. (Hmm, where have we heard that phrase before?) Whoever created the Butcher series doesn’t stop there, though. Not content to write a Mack Bolan clone, the author has Bucher recruited by a top-secret government organization known as White Hat. He receives the code name Iceman and is sent out on all sorts of secret agent-type missions. So what we have here is a deliberate cross between the Executioner and Nick Carter, and obviously the blend was a success, at least for a while.

All that back-story takes place before the first novel in the series, KILL QUICK OR DIE. In this one Bucher is sent to bring in a defecting Chinese Communist scientist named Dr. Fong who has invented some new super-duper gizmo. The actual gadget is purely a McGuffin and has nothing else to do with the plot. The Chinese don’t want Fong defecting to the West, though, so instead of sending agents of their own to track him down, they hire the Mafia to kill him. (You can’t worry too much about logic in a book like this.) In the course of trying to find Dr. Fong and save him from being assassinated, Bucher encounters a couple of other evil Syndicate plots and sets out to put the kibosh on them, too. We get some globe-trotting – from Atlanta to Cairo to Tel Aviv and back to Atlanta – and lots of politically incorrect, over-the-top action scenes. It’s all extremely goofy and written in a very distinctive style. I wouldn’t exactly call this book good, but I will say that I had a lot of fun reading it and I might even read some more of the series.

The authorship of the non-Avallone Butcher books is open to debate. The veteran Western author Lee Floren is supposed to have written at least two of them (#10 THE DEADLY DOCTOR and #11 VALLEY OF DEATH, according to the listing of Floren’s novels in TWENTIETH CENTURY WESTERN WRITERS), and some bibliographers attribute all the non-Avallone titles to him. I suppose it’s possible, but KILL QUICK OR DIE doesn’t read at all like Floren’s work to me. The style in some of the later books is different, leading me to believe that at least two authors besides Avallone worked on this series. I’d like to know who wrote this one, because it’s really like nothing else I’ve ever read before.

There's a bunch of these early Buchers translated in Finnish and a Finnish bibliographer claims that they were written by Avallone and Floren. But as his bibliography is full of errors and miscontributions, I'd be inclined to think that he just wasn't right about this thing. I've read only one of the Buchers, but I didn't get interested in it.

Floren and Avallone are the only authors whose names have definitely been tied to the Butcher series, as far as I know. I'm sure Avallone wrote only #27 - 35, because we were friends at the time and his letters were full of comments about the series. Since Floren was still alive at the time his entry in TCWW was written and probably furnished the bibliographic info, I'm inclined to believe he wrote only the two mentioned in that list. I don't have either of them yet so can't study them for style. I do have one of Floren's soft-core porn novels written under the name Matt Harding and plan to read it soon, just to get an idea of his non-Western work.

"Kill Quick Or Die" by Stuart Jason (James Dockery). Supposedly, a Chinese scientist wants to come to the U.S. with a scientific discovery they don't wish her to divulge.