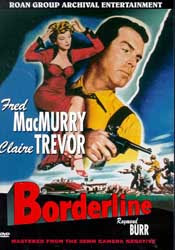 This movie is from a boxed set of cheap film noirs that I found at Half Price Books not long ago. I wouldn’t actually call all of the movies in the set noir. BORDERLINE certainly isn’t. But it is a pretty good cops vs. drug smugglers film anyway.

By 1950, Claire Trevor was getting a little long in the tooth to be playing a policewoman working undercover as a showgirl in a Mexican cantina as she tries to track down the head of a smuggling ring, but she works hard at the role. She finds herself getting mixed up in a war between rival gangsters Fred MacMurray and Raymond Burr, and after MacMurray mistakes her for Burr’s moll and kidnaps her, she’s forced to pretend to be his wife as he makes a desperate run for the border with a fortune in drugs. Of course, not everything is what it appears to be. Along the way there’s a little comedy, a little romance, and several shootouts, including an action-packed climax.

Having grown up watching Fred MacMurray playing genial patriarch Steve Douglas on MY THREE SONS, I always have a little trouble accepting him in tough-guy roles. There’s also his uncanny and not at all coincidental resemblance to a certain Big Red Cheese to get past. However, he’s plenty hardboiled in this one and does a good job as a ruthless criminal with secrets of his own. And Raymond Burr is perfectly cast as a beefy, white-suited gangster. There’s even a bit part as a U.S. Customs agent for one of my favorite character actors, Charles Lane, who I believe celebrated his 102nd birthday not long ago.

BORDERLINE is nowhere near a classic – for one thing, the filmmakers tip some of the plot twists ’way too early – but it’s good solid entertainment anyway.

Posted by James Reasoner at 9:25 AM

The film was written by Devery Freeman, who died rather recently. He wrote lots of films and the novel TAPS. Check him out:

Fred Mc carried Double Indemnity for me. Well, let's say he shared it with Robinson. He was also a very anti-heroic lawman in at least one western (can't remember the title). And in both he was very convincing. I guess that's the difference in our ages, James. I was late teens when Sons came on the tube. What I remember most about that show was that McMurray insisted that all his lines for a season be written in advance so that he could enact them over a week or so. They could then cut them into the editing as needed. He apparently hated the show even more than I did. -Ed Gorman