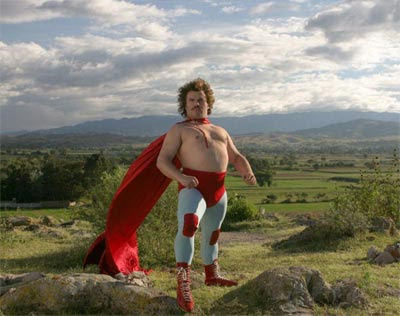 After my last few movie-related posts I can't have much credibility left as a film critic, so I figured I might as well continue that trend. We watched the DVD of this movie tonight, and while I don't think it's a great film by any stretch of the imagination, I enjoyed it. I get the impression that most people either like Jack Black or can't stand him. I've seen most of his movies and liked them fairly well (although I think he was badly miscast in KING KONG). In this one he plays a cook in a Mexican monastery/orphanage who moonlights as a masked wrestler so he can afford to buy better food for the kids. I don't know if "whimsical and off-beat" or "just plain weird" is a better description of how it all plays out. It's crude and silly a lot of the time and not really laugh out loud funny, but the film's heart is in the right place and the wrestling sequences are pretty effective. If you like Jack Black, NACHO LIBRE is certainly worth watching. If you don't, you'd be wise to avoid it.
Posted by James Reasoner at 11:09 PM

I'm definitely in the like Jack Black camp for now, and I also liked Nacho Libre quite a bit .. You're right that it can't be called a "great" movie, but I laughed more during it than in just about any other movie in 2006, so it worked for me

I'm in the opposite camp from Reel Fanatic. I too thought Black was badly miscast in King Kong.

You're very right in your assessment of the 'love him, hate him' vibe regarding Jack Black. I am in the 'love him' camp and even enjoyed him in Kong. Nacho Libre is definitely a movie with alot of heart. While I think it is hilariously funny in such a low-brow way I also find it to be very touching.