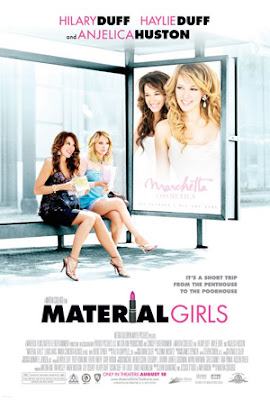 I said I was going to write something about every movie we watch this year, so . . . In this one, Hilary and Haylie Duff play sisters who inherit a cosmetics empire from their late father. Hilary is the brainy one, Haylie the hard-partying one. Through some skullduggery, they lose their fortune and have to live like normal people, which of course teaches them many valuable lessons. Then, while watching ERIN BROCKOVICH, they decide to become private eyes and find out who was responsible for their downfall. Oh, yeah, along the way they meet a couple of cute guys. While watching this movie, I kept asking myself, "Were the Olsen twins out of town that week?"
But I actually stayed awake through nearly all of it, and since I'm obviously not the target audience for a movie like this, that must say something for it. Plus Brent Spiner is in it, although I didn't recognize him until I saw the credits at the end. Livia knew who he was right away, and she found a particular shot where I had to admit that he looked exactly like Data. I don't know how I missed him.
So, this is a fairly watchable film of its type, and to tell you the truth, I'd much rather watch something like this than some ponderous, angsty, indie drama where nothing happens except people sit around and brood for ninety minutes.
Posted by James Reasoner at 11:16 PM