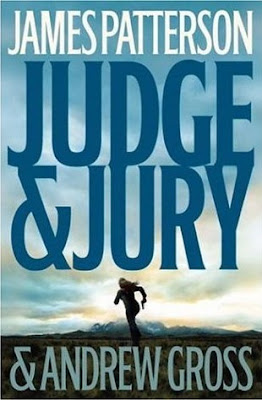 James Patterson is one of those authors who is very hit-or-miss for me. I’ve started quite a few of his books that I never finished because I just didn’t like them. But I’ve read enough of them I enjoyed so that I keep trying them. I’ve learned that his most popular series, the Alex Cross books, leave me cold, so I avoid them. I haven’t tried his other series, The Women’s Murder Club, yet. But some of his stand-alones are pretty good, like THE JESTER, HONEYMOON, LIFEGUARD, and now JUDGE & JURY.

This is part legal thriller, as the government puts mob boss Dominic Cavello on trial and Cavello pulls all the strings he can to get out of it, and part revenge thriller as an FBI agent and one of the jurors from the trial go after Cavello when he escapes justice. As usual, the chapters are very short, the writing alternates between first and third person (this still bothers me, but not as much as it used to), the pace is fast and the plot takes an unexpected twist or two (even though some of them are pretty darned far-fetched). Patterson’s co-author on this book is Andrew Gross, who worked on some of the Patterson novels I liked in the past, so I wasn’t too surprised that this one turned out okay. I assume that Patterson provided the plot and Gross did most of the writing, but of course, I don’t know that for sure. I wasn’t there. I believe Gross has sold some solo books, so I’ll probably read those when they come out, or at least the first one to see if I like it.
Posted by James Reasoner at 10:32 PM