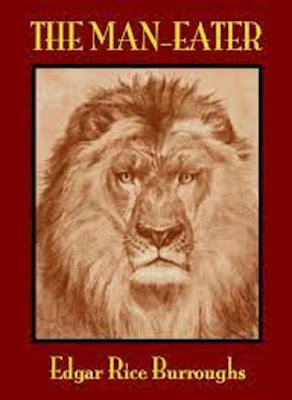 THE MAN-EATER is a short novel by Edgar Rice Burroughs that was serialized in the newspaper The New York Evening World in November 1915. Based on an unsold movie treatment, it never appeared in book form during Burroughs’ lifetime but eventually was reprinted in a double volume with another short novel, BEYOND THIRTY. Since then it’s appeared in numerous e-book versions, one of which I just read.

As you might guess from the title, THE MAN-EATER features a lion as one of the central characters. In fact, I’d go so far as to say that the lion is one of the co-protagonists in this book, along with Richard Gordon, a bored, wealthy young playboy (but a good, decent, courageous sort, for all that) who travels to Africa on an impulsive quest to help a beautiful young woman he’s never met recover a missing will that’s the key to a fortune she stands to inherit. Opposing Gordon is the young woman’s cousin, one of the most dastardly villains you’ll ever hope to encounter. The fast-paced action shifts from Africa to Virginia, back to Africa, and then finally concludes with an exciting return to Virginia.

Burroughs’ tendency toward coincidence-driven fiction rises to a whole new level in this volume. One tiny chink in the vast wall of coincidence probably would bring the whole plot crashing down. And to this I say a resounding “Who cares?” I raced through the story with great enjoyment. The hero and the heroine are both stalwart, the villain and his henchmen are thoroughly despicable, and the vengeance-seeking lion is a great character.

As I’ve probably mentioned before, Burroughs is one of those writers I loved as a kid whose work doesn’t always hold up great when I read it now. THE MAN-EATER is a little creaky, but I had a lot of fun reading it. I can understand why some contemporary readers wouldn’t care for it, but while reading it I was fourteen years old again . . . and that’s one of the main reasons I read old books, and new ones that make me feel the same way.

I happened to grab an Ace copy of "Jungle Tales" in a store before we went camping one summer in the Owens Valley in CA. After reading (devouring?) 1/2 of the book on the way up to Independence, I jumped out of the car and was soon stalking through "the jungle", watching for Numa and all the other creatures I'd been reading about. Fan for life.