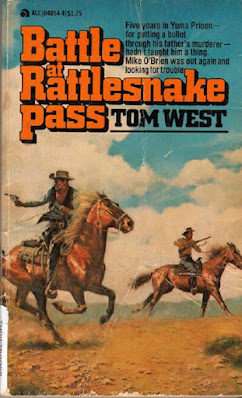 Tom West was actually an Englishman named Fred East who moved to the United States after being wounded in World War I, and after knocking around in various jobs, including journalism, he broke in as a Western novelist in the early 1940s, publishing books under the Tom West name as well as the pseudonym Roy Manning. He also wrote several novels under the Peter Field house-name in the Powder Valley series. I’ve found his work to be a little inconsistent, but generally I like his books quite a bit and really ought to read more of them. Here’s an excellent blog post about him with reviews of some of his books.

Many of the Tom West books were published originally as half of Ace Double Westerns. BATTLE AT RATTLESNAKE PASS was published in 1965 with TRAIL OF THE VANISHING RANCHERS by Stephen Payne on the other side of Ace Double M-124. It was reprinted by Ace sometime in the Seventies by itself, and that’s the edition I read recently. That’s my copy in the scan at the top of this post.

As this novel opens, hardbitten young cowboy and ex-convict Mike O’Brien is on a stagecoach heading back to his hometown in Arizona. He’s just served five years in Yuma Territorial Prison for shooting (but not killing) the man who killed his father in a shootout. O’Brien’s father was a hardscrabble rancher suspected of being a rustler, and he was gunned by the foreman of a rival cattleman after being caught with some cattle with blotted brands. Of course, O’Brien believes his father was framed. He intends to go back and take over the family ranch, but he knows everybody in the valley hates him and will try to run him out. On the stagecoach, he meets a beautiful young blonde, but he discovers that she’s the daughter of a sheepherder who’s trying to extend his grazing land.

Not surprisingly, trouble comes at O’Brien from all sides, and his only ally is a crippled gunfighter he befriends. He winds up being framed not only as a rustler but also as a murderer and has to go on the run to try to clear his name and uncover the mastermind behind all the trouble plaguing the valley.

As you can tell, the basic plot of this novel is pretty standard stuff, but West takes it in directions that I didn’t really expect. Honestly, I didn’t know what was going to happen or who the real villain was until the end, and that’s very unusual. There’s a lot of great action along the way, some humor, and colorful characters who speak in colorful dialogue that never quite reaches “Why, yuh mangy polecat!” levels. Mike O’Brien is a good protagonist, stubborn as all get-out, not quite likable some of the time, but always sympathetic.

Now, this is a book that sure could have used some better editing. There are quite a few typos, some awkward writing that could have been fixed pretty easily, and despite the title, there is no Rattlesnake Pass in this book. The only pass that’s ever mentioned is Sidewinder Pass. Somebody should have done something about that.

All that said, I really enjoyed BATTLE AT RATTLESNAKE PASS. It’s just a good, old-fashioned action Western, the kind of book I never tire of. I had a fine time reading it and I’m glad I have quite a few more Tom West books on my shelves. I need to get to some of them soon. 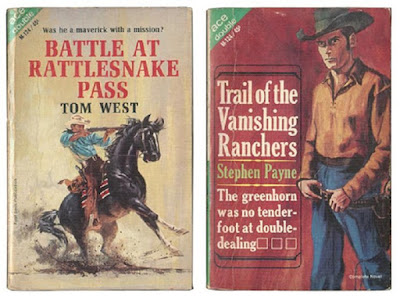