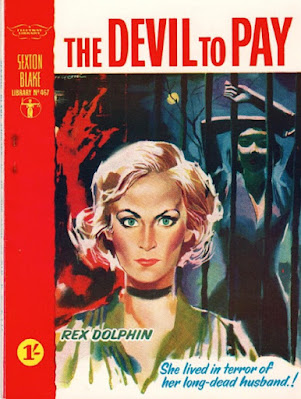 This is the first Sexton Blake novel I’ve been privileged to read in its original form, a slim, digest-sized paperback published in January 1961. Not only does it have an excellent cover, but the story inside is also probably the best Blake yarn I’ve read so far.

THE DEVIL TO PAY (Sexton Blake Library 4th Series, Number 467) is from the era when Blake is a private detective, complete with a beautiful blond secretary in Paula Dane. As it opens, Blake is meeting with movie writer/director Sam Waxman, who wants Blake to find the leading lady of the film he’s currently making in England. Sandra Kennedy is an English actress who moved to the States and found stardom in American films, but she’s gone missing from Waxman’s latest project. He thinks her disappearance has something to do with Sandra’s twin sister, who was murdered five years earlier in a castle-like tower on an isolated English estate, due to her involvement with a cult of wealthy devil worshippers, most of whom were killed in a fiery car crash while being pursued by a policeman after the ritualistic murder is discovered. But some of the cultists get away, including—maybe—the leader and owner of the estate, who’s descended from another aristocrat of the same name, who led a similar devil cult two hundred years earlier.

Got all that? Author Rex Dolphin really throws in the plot elements at a furious pace. Most of the previous paragraph is just back-story that gets Blake and Paula to sinister Deville Manor in the middle of the night, where a dangerous wild dog roams the grounds (it’s a German Shepherd, not a hound, in case you were wondering). Before you know it, there’s another murder, this one of the locked room variety, secret passages, corpses crumbling to dust, business and financial shenanigans, a hardboiled cop who also believes in ghosts, and a considerable amount of chasing around the estate and Blake getting knocked out.

I had a wonderful time reading this novel. Rex Dolphin (and that’s his real name, not a pseudonym or a house-name) could really spin a fast-moving tale, and the plot, while complicated, all ties together nicely. As with the last Blake novel from this era I read, DARK MAMBO, move the setting from England to Florida and this would have made an excellent Mike Shayne caper in MIKE SHAYNE MYSTERY MAGAZINE. This story has never been reprinted or scanned and posted online, so you’re not likely to come across a copy, but if you ever do, it’s well worth reading.

Your review conveys the appeal of this Sexton Blake yarn perfectly, James. It's one of my favorites of the era but, as you comment, it's not readily available for reading online. . . A pity, since printed copies are generally in poor condition, especially due to the now rusting staples that held them together and the fragile paper covers.