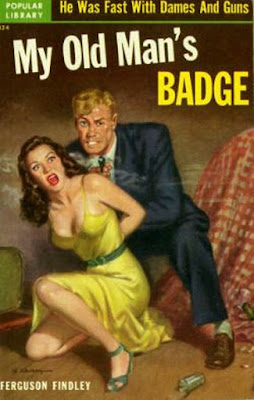 Somehow I never came across this vintage paperback with its great cover by Sam Cherry, and I never heard of the author, Ferguson Findley (whose real name was Charles Frey). But Stark House will soon be reprinting it as part of the excellent Black Gat line, and I’m glad because MY OLD MAN’S BADGE turns out to be a very good novel. 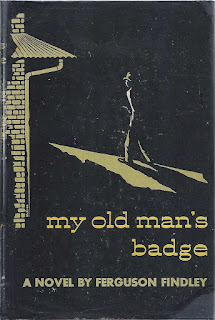 Johnny Malone is a young cop in New York City whose father was also a cop. Fifteen years before this book opens, the elder Malone was murdered, and the killer was never caught. That failure of justice has eaten away at Johnny ever since. Now, after all those years, a new clue to the murderer has turned up, and Johnny, newly promoted to detective, goes undercover to infiltrate a drug smuggling and peddling ring that has some connection to the man who killed his father. 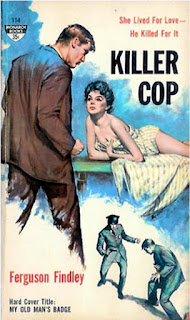 The plot in this novel is pretty straightforward, which makes it work more as a procedural and a suspense novel than an actual mystery. What elevates it is Findley’s writing, which is sharp and tough and observant. He does a great job of depicting the sleazy lower rungs of New York City society and vividly captures the squalidness of the dope ring Johnny Malone becomes part of, as well as its customers. The pace never slows down much, and Findley pulls off the neat trick of using other points of view in a book that’s primarily written in first person. He really had me flipping the pages when he got toward the end. 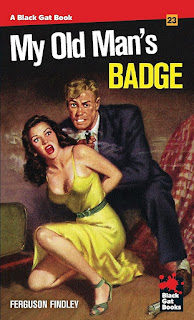 This was Findley/Frey’s first novel, and he wrote only a handful more after it was published in 1950 before becoming an executive with Standard Oil and evidently never writing another word. It kind of baffles me how somebody with his obvious skill could just turn his back on writing like that, but it happens from time to time. MY OLD MAN’S BADGE was published originally in hardback by Duell Sloan & Pearce, reprinted in paperback by Popular Library, and then reprinted again with a different title by Monarch. The Black Gat edition will be out soon, if it’s not already, and I highly recommend it.

Now, about that cover . . . Sam Cherry did scores of covers for pulps in the Thrilling Group, which was owned by Ned Pines, who also owned Popular Library. As a result, a lot of those pulp covers were reused as paperback covers, but Cherry also did some as originals for Popular Library. This one looks like it could have been on one of the detective pulps, but if that’s the case, I haven’t been able to find it. As always, any information on that is more than welcome. But I think it’s an original, since it does match one of the scenes in the book. And it’s a good one, that’s for sure.

Great review. Makes me really want to read it, especially the part about the terse descriptions of seedy New York.

I am guessing that the appeal of a steady salary and an expense account outweighed the creative impulse of writing. Also possibly the social status. Being a pulp writer did not get you book tours and podcast interviews the way it does today!

Love those covers. I gotta get this one. Thanks for the heads-up.

MY OLD MAN'S BADGE was adapted into a half-hour presentation of the anthology TV series SUSPENSE with Barry Nelson as Johnny. SUSPENSE was, of course, a TV version of the justly famous old-time radio anthology.

The sequel WATERFRONT was adapted into a full-length movie, THE MOB, with Broderick Crawford as the "rookie" detective.

Conan is right, I'll bet...I suspect that he could bury himself in his job, whether it was a good or bad one from his perspective, while being most likely a lot more money than tv or film adaptation, or hardcover first publication at the cusp of the '50s without Spillane-level following (ask the ghost of Patricia Highsmith). And then there's the booze, and such.

Sam Cherry's depiction of the protagonist is pretty damn close portrait of the actor John C. McGinley, which I've noted to a bunch of his fans on Twitter on to their apparent amusement. A few even clicked on the link to this post.

I hadn't noticed the resemblance to McGinley, but you're absolutely right about it.