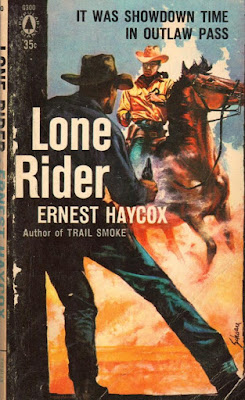 As I’ve mentioned before, I’ve come around to being a fan of Ernest Haycox’s work, especially the numerous novellas he published in various Western pulps during the late Twenties and early Thirties. LONE RIDER, published by Popular Library in 1959, reprints two of those novellas, “The Black Clan” from the June 10, 1931 issue of SHORT STORIES and “Lin of Pistol Gap” from the May 14, 1930 issue of WEST (which was published by Doubleday at the time, although later on it was one of the Thrilling Group pulps published by Better/Standard). 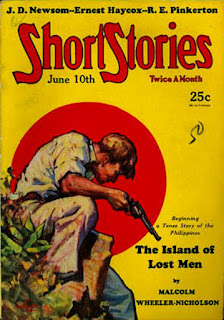 “The Black Clan”, which is retitled “Lone Rider” in this paperback reprint, finds drifting hardcase Jeff Rawlins taking a job on the right side of the law for a change: protecting an isolated horse ranch from a family of outlaws who have their own town high in the hills. Rawlins finds himself saddled with untrustworthy allies, plagued by crooked lawmen, and ultimately bushwhacked, only to be helped out by a mysterious young woman. It’ll come as a surprise to absolutely no one that the young woman is connected to the outlaw clan Rawlins is trying to bust up. There’s also an enigmatic gunman who comes in and out of the story, sometimes befriending Rawlins, other times opposing him, and I’ll admit, even with several decades of experience in plotting these things myself, I didn’t know what to make of this character or how Haycox was going to resolve the conflict between him and Rawlins. That sort of uncertainty is a nice change of pace, and overall this novella is a top-notch yarn with plenty of action and good writing. 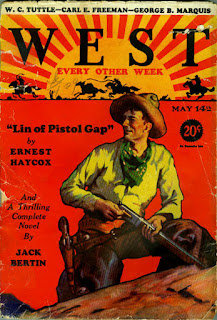 “Lin of Pistol Gap” is a feud story. The war between the Merchant family and the Quarles family has been in an uneasy truce for four years, but the election of a sheriff sympathetic to the Quarles side brings the hotheaded fugitive Rainy Quarles back to the valley, ready to resume the bloodshed. Lin Merchant, the leader of his faction, wants to maintain the peace, but that won’t be easy to do, especially once he finds himself falling for his arch-enemy’s sister. There’s also a mysterious stranger in this one, like in “The Black Clan”, and the reader doesn’t know where he’s going to land. This is the weaker of the two stories, with a lot of scenes that are all talk and seem to go on and on (something that’s quite common in Haycox’s work), but when the action finally breaks out near the end, it’s well done and the climax is quite satisfying.

Overall, LONE RIDER is a nice little reprint package and a vintage paperback worth picking up if you’re a Western fan and come across a copy. I’ll continue reading these Haycox pulp novellas when I find them.

I recommend "Trigger Trio" if you don't have that Haycox story collection yet.

I've read and enjoyed TRIGGER TRIO. Here's my review of it from seven years ago:

Admittedly, I've come to appreciate Haycox's work more since I wrote that post, although it's generally complimentary.

Looks like it's in really good shape, too. Thanks for the heads-up.