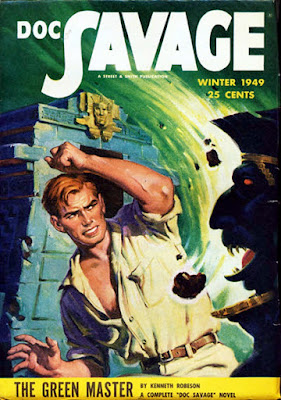 With the Winter 1949 issue, DOC SAVAGE returned to its pulp roots, going back to the traditional pulp size after several years as a digest magazine. The covers by George Rozen also attempted to recapture the adventurous dynamic of the classic Walter Baumhofer covers from the magazine’s early years. The first novel in this attempted revitalization of the lagging publication was “The Green Master”, and it’s the next one up in my continuing project to read all the Doc Savage novels I’ve never read. 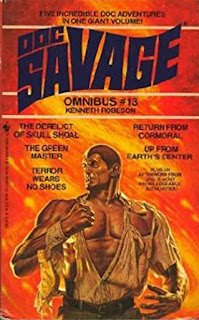 This yarn begins with Monk Mayfair, one of Doc’s aides, being trailed in New York City by a beautiful blond woman and then a couple of blond men, all of whom seem very unfamiliar with being in a city, as if they came from somewhere far away from civilization, like maybe, oh, a lost city. Sarcasm aside, it turns out that these strange folks have incredible powers of persuasion that are like super-hypnotism, but when Ham Brooks, another of Doc’s aides, and then Doc himself become involved in the affair, it becomes obvious that what’s going on isn’t hypnotism but something much more astounding. Then people start trying to kill Doc, his men, and the blond strangers.

Globe-trotting adventure was always one of the hallmarks of the Doc Savage series, and this novel delivers when the action shifts to South America. I don’t think it’s too much of a spoiler to say that, yep, there’s a lost city, and it’s a good one. Doc, Monk, and Ham wind up being in on plenty of action. (Doc’s other aides aren’t even mentioned this time around.)

The ultimate explanation for everything is a little unsatisfying, as if author Lester Dent didn’t have room to develop the plot as much as it should have been. THE GREEN MASTER probably isn’t more than 30,000 words long. But Dent’s writing is so sharp and funny that the book is still very enjoyable. It may not be a true return to greatness, but it’s a good stab at it.

Looks like a nice try, but it lacks the lurid color and sheer energy of pulp covers in their prime.

The cover is fine, but... I'd really like these MUCH without the constant bickering of Ham and Monk! It just drives me crazy. After several, I gave up on Doc Savage because of that.

Rick is exactly right. I also gave up on Doc Savage because of the childish dialog and silly behavior of Monk and Ham. This is fiction for the teenage boy market. Sort of like the B-western sidekicks, which ruined many a film.

I have to admit, Monk and Ham never bothered me, maybe because I started reading the books when I wasn't even a teenager yet. I found them funny, and still do, to a certain extent. I didn't even mind Habeas Corpus. That ape of Ham's, though, that was too much.

Not surprisingly, I love the Western sidekicks, too.

There was usually an obligatory Monk and Ham kerfluffle early in the books, then things settled down. I always figured Dent's editors (or Ralston) were telling him to follow that formula and he got it out of the way and went on with the story. It didn't bother my enjoyment of the series.