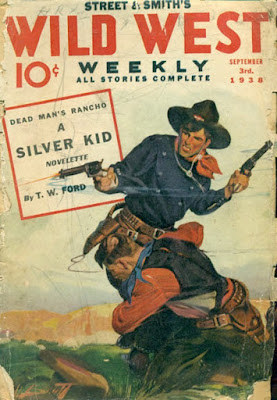 T.W. Ford was a very prolific pulp writer, authoring several hundred Western, detective, and sports yarns over a long career. He also worked as a pulp editor but is almost completely forgotten today. The fact that he wrote only a few novels probably has something to do with that, as well as the wildly inconsistent quality of his fiction. His work was popular, though, and was often featured on the covers of the pulps in which it appeared. His most successful series starred a drifting, heroic gunfighter named Solo Strant (an odd name for a pulp hero), who was also known by the more conventional nickname The Silver Kid because of the silver buttons on his black shirt, the silver conchos on his chaps and the band of his black hat, his silver-butted Colts, and the small silver skull that adorns his hat’s neck strap. Ford wrote more than sixty Silver Kid stories between 1935 and 1950. At first they appeared regularly in WILD WEST WEEKLY and then eventually migrated over to the Columbia pulps REAL WESTERN, DOUBLE ACTION WESTERN, WESTERN ACTION, and COMPLETE COWBOY. Most of them were either novelette or novella length, sometimes billed as full-length novels even though they actually weren’t.

Several years ago I started one of the later Silver Kid stories and didn’t care for it, didn’t even finish it. But recently I read one of the earlier ones from WILD WEST WEEKLY, “Dead Man’s Rancho” (from the September 3, 1938 issue), and thought it was much better. In this one, the Kid helps a posse capture an escaped convict, only to discover that the man is actually innocent and in such poor health that he’ll die in prison. The proof that will clear the man’s name and save him from an unjust fate is in the hands of an outlaw who’s headed for a place called Dead Man’s Rancho, a notorious outlaw hideout in the desert where only the lowest, most desperate owlhoots go because the place is supposed to be cursed. The man who built it went insane and disappeared into the desert, but there are rumors that he’s still alive, somewhere out there . . .

Well, of course Solo doesn’t let any of this stop him from going after the proof he needs to save the unjustly imprisoned man, and along the way Ford adds some extra complications in the form of a murderous gambler and a fortune in missing bank loot. There’s plenty of action, and a few genuinely creepy scenes work very well.

I mentioned the inconsistency of Ford’s work. He’s one of the few authors I’ve encountered whose prose can be really good and really bad not just in the same story but sometimes on the same page. There are a few clunkers in this yarn. But there are also some great lines of dialogue and paragraphs that just sing. I really enjoyed “Dead Man’s Rancho” and think I’m going to have to hunt up more Silver Kid stories. This one is available in an e-book collection called THE PULP WESTERN ANTHOLOGY VOLUME 1, and if you’re a Western pulp fan, I think it’s well worth reading.

i just finished T W Ford's western: "The Guns of the Unhung"... it reads just as you said with good bits and bad bits but much tastier than a curate's egg. The title suggests a vampiric theme and the first page has a dark description of a son witnessing his innocent father 'dancing in the air', a victim of a small town sherrif's vigilante 'string 'em up' policy.
Shall go now check out Dead Man's Rancho. TW seems not just forgotten but hard to find as well.