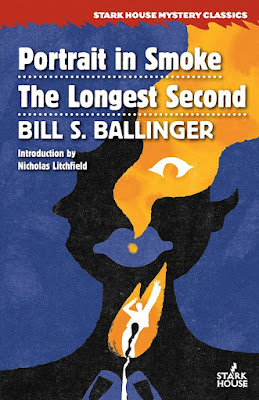 PORTRAIT IN SMOKE
Danny April is obsessed. He buys out a little collection agency in Chicago, and that s how he first meets Krassy. He’d never seen anyone so beautiful. She was Krassy Almauniski then, when he first runs across her picture in his files. She’s gone through several identities since then. As Danny tries to track her down, each new name presents him with a portrait of a woman on the move. Krassy is climbing up the social ladder, one sucker at a time. There’s the photographer who signs off on a charge account for her, later arrested for larceny. And the ad executive... he gets off lightly. He gets to walk away with his pride. Not all the men who Krassy meet are so lucky. But Danny knows he’ll be different. So he keeps looking... until at last he finds her.

THE LONGEST SECOND
When I awakened, I stared straight above me at the ceiling ... I attempted to turn my head. It was then I realized that my throat had been cut. The pain ran down both sides of my neck ... I gasped, choking for air. The next day I regained consciousness again ... Suddenly it struck me that I didn't know my own name!... They check his fingerprints and find out that his name is Victor Pacific. He has no memories of who he is, what he is, or why someone tried to kill him. He remembers the name Horstman. But he has no idea of how to find him. All he can do is to begin a search for the clues to his former life. Then he meets Bianca but will she be able to help him before they strike again?

I haven't read anything by Bill S. Ballinger in a long time. Both of these novels sound great and I'm looking forward to them.