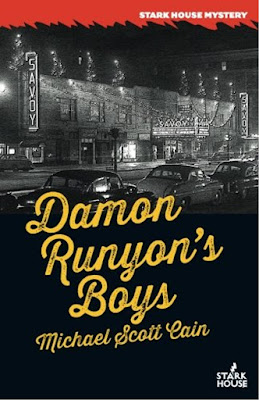 We all know Stark House as one of the top reprinters of classic noir, hardboiled, and crime novels, but they also publish some excellent original novels in those genres as well, the latest of which is DAMON RUNYON’S BOYS by Michael Scott Cain.

Set in post-World War II New York City, DAMON RUNYON’S BOYS opens with the leader of a Lindy Hop dance troupe being gunned down by a pair of zoot-suited killers at the Savoy Ballroom. Soon investigating the crime is Damon Taylor, the top writer at a national crime tabloid who was once a protégé of the similarly named Damon Runyon. He has a cop friend who cuts him some leeway but not an unlimited amount, and he also gets help from Walter Winchell and a young reporter on a leftist journal named Truman Capote. Taylor’s probing of the case takes him into the middle of a gang war over the garment district whose players include the famous mobster Frank Costello. Not surprisingly, Taylor’s efforts get him beaten up and threatened. More murders ensue. There are a lot of plot twists to untangle before Taylor discovers the truth.

Historical mysteries like this are great fun, but they’re also tricky to write. It’s easy to weigh them down with too much period detail, and sometimes the historical characters act in unbelievable ways. I’m happy to report that Cain doesn’t fall into either of those traps. The setting and the time period ring true without being overdone, and although I’m far from an expert on either one, I believed both Winchell and Capote might have been involved with this case. Damon Taylor is a flawed but likable protagonist, and Cain keeps the action moving along at a very nice pace indeed. DAMON RUNYON’S BOYS is exactly the sort of complex, hardboiled, vividly written novel that I really enjoy, and I had a great time reading it. Highly recommended.