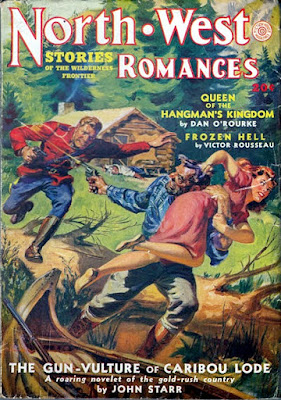 That's another action-packed Norman Saunders cover on this issue of NORTH-WEST ROMANCES. Some good story titles, too. I'm especially fond of "The Gun-Vulture of Caribou Lode". No telling who wrote it, since John Starr was a Fiction House house-name. The other authors in this issue include long-time pulpster Victor Rousseau, "Northern" specialist Dan O'Rourke, A. deHerries Smith, Sewell Peaslee Wright, and a few others I've never heard of.
Posted by James Reasoner at 5:00 AM

At first i thought you had confused this with the Spring 1951 issue, till i checked the FictionMags index and realized that the enterprising people at Fiction House had reprinted the same stories with the same cover in 1951. Must have been

Fiction House had some of the best story titles; with titles like "Wolf-Queen of the Golden Avalanche" and "Buckskin Loot for Lobo Men", it's hard to resist picking up an issue. "Queen of the Hangman’s Kingdom" was published thrice in Northwest Romances.

Sai,
Good catch on that. They reprinted the stories featured on the cover with new stories filling out the rest of the issue. Fiction House sure got their money's worth out of their covers and stories. Renown Publications did the same thing with their digests. Some of the cover art and the spot illos from the stories turn up again and again over the years.

Now I need to write a story called "Queen of the Hangman's Kingdom".