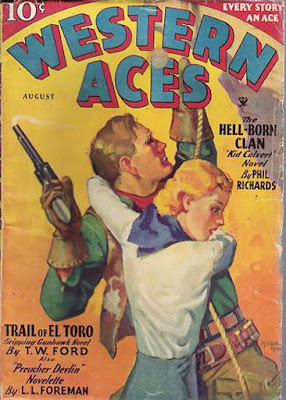 Pursued by Sheriff Terry Reynolds, who is both the girl he loves and his most relentless enemy, noble outlaw Kid Calvert is shot and wounded by Terry while he and Dandy McLain, another member of Calvert’s Horde, are being pursued by a posse. Embittered by this, the Kid decides that if he’s going to be harried and hunted as an owlhoot, even though he only breaks the law to help people who need it, then he might as well start acting like a real owlhoot. But before he can do this . . .

The Kid finds an abandoned baby! Terry is framed as a crooked sheriff and is threatened by a lynch mob! A gang of rustlers led by the notorious bandido known as Brazito shoot up the town! A hunchbacked saloon swamper becomes a kill-crazy gunslinger! Herds of stolen cattle disappear into thin air!

Yes, it’s another crazed, breathless, over-the-top adventure of Kid Calvert and Calvert’s Horde from Phil Richards. “The Hell-Born Clan” is the longest and last and best of these breakneck yarns. It appeared in the August 1935 issue of WESTERN ACES, after a four-month gap in the series since the previous story “Senorita Death”. If you’re expecting some resolution since this is the final story, you won’t get it, but you will get an incredible amount of action as guns blaze and horses gallop almost constantly. Somehow in the midst of all that, Richards manages to put together a fairly coherent and complicated mystery plot. Sure, quite a bit of it depends on coincidence, and you’ll probably see the big twist at the end coming, but as far as I’m concerned, he makes it all work.

Over and above that, what runs all the way through this series is the doomed, epic love story between Kid Calvert and Terry Reynolds, the likes of which I haven’t encountered in any other Western pulp—and I’ve read a bunch of them. All the hard ridin’ and shootin’ is just window dressing for this tragic romance. That’s what sets the Kid Calvert stories apart, and what makes the collection of them from Altus Press one of the best books I’ve read this year.

At this late date, we’ll never know whether Richards was aware the series was coming to an end, or if he assumed that the Kid would ride again. But I’m really sorry there are no more of these to read. I hope the Kid and Terry finally found some peace and happiness together . . . but I think it’s more likely they died side by side, with guns blazing as they battled against evil-doers.