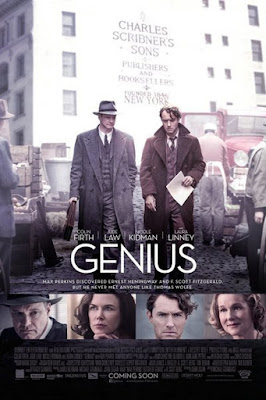 I guess I'm just the target audience for certain movies, which is the case with GENIUS, a film about the relationship between editor Max Perkins (an oddly cast but effective Colin Firth) and author Thomas Wolfe (Jude Law, chewing the scenery relentlessly, but the part sort of calls for that). Nicole Kidman is Wolfe's mistress Aline Bernstein, Guy Pearce is F. Scott Fitzgerald, and Dominic West is Ernest Hemingway. (I find it cool that West has now played both Hemingway and Howard Stark.)

The reviews weren't kind to this movie, and I can see why. It's pretty stagebound, and a lot of scenes consist of Wolfe and Perkins arguing about the editing of Wolfe's huge autobiographical manuscript O LOST!, which eventually becomes his debut novel LOOK HOMEWARD, ANGEL. Once that's a success, they move on to the even more gargantuan OF TIME AND THE RIVER before the two men have an inevitable falling-out. Along the way there's some soap operatic stuff with Wolfe and his mistress and Perkins and his wife, as well as the travails of Scott and Zelda Fitzgerald, but really, the focus is on writing and editing for the most part, and you know me, I can't get enough of that stuff.

This may come as a surprise to some of you, but early in my career I, too, wanted to write The Great American Novel. I was torn between wanting to be Mike Avallone/Harry Whittington or Ernest Hemingway/F. Scott Fitzgerald. (I never wanted to be Thomas Wolfe.) Over time I realized my talent and personality were more suited to the Avallone/Whittington end of the spectrum. Not that I'm disparaging those writers at all. Avallone might not have been able to write THE GREAT GATSBY, but Fitzgerald damn sure couldn't have written THE THOUSAND COFFINS AFFAIR, and which one of those has had more of an influence on my career and stayed with me longer, huh? (Now I have to digress again and make clear that I'm not knocking GATSBY, which I love immensely, anachronisms and all. And Whittington, come to think of it, could well have written something like THE SUN ALSO RISES, which is one of my all-time favorite novels. And now I'm off the rails completely . . .)

To get back to the point of this post, I really enjoyed GENIUS. I've never read a word of Thomas Wolfe's work—the books were too long for me even back when I regularly read long books—but the quotes from them in this film sort of make me want to. I'll have to think about that. In the meantime, if you're a writer and/or editor, you might enjoy this movie, too. I think it's well worth checking out.
Posted by James Reasoner at 4:00 AM

Well, I wasn't going to watch it. But now I am. I love all that boring writerly/editorly stuff, too.

I read about half of TIME AND THE RIVER because John-Boy Walton loved it so much, but that was as far as I could get. I was only 12 and resolved to try it again when I was older, and now that I'm older I guess I should dust it off one more time. Or maybe I'll just read THE THOUSAND COFFIN AFFAIR!

I missed this movie and I'll have to get the dvd. I've always liked books and movies about Wolfe, Hemingway, Perkins, Fitzgerald, etc. I read LOOK HOMEWARD ANGEL a long time ago and liked it a lot. It's full of life, passion, and hope for the future.

I read LOOK HOMEWARD, ANGEL because of a Ray Bradbury story about Wolfe (or that's how I remember it). Loved it, but then I was probably just the right age for it. I can't picture Jude Law as Wolfe, but maybe Law's bigger than I think. Anyway, I think I need to see this movie, and maybe it's even time to read YOUNGBLOOD HAWK again.

OK, you got my attention.

I've heard of this movie but not seen it. I will try to work it in.

I treid LOOK HOMWARD, ANGEL when I was in college, and ran out of steam about a third of the way in. I haven't tried to get back to it. It seems there are too many other books clamoring for my attention, not all of them - most of them - Literary in any sense, just stuff I want to read.

Thanks, I will find this movie.

Revealing that you think the same way about literature and writers.

Thank you for sharing.

Whittington wanted to write The Great Gatsby too!

Nice review of a movie I'd never heard of before, but like Bill I cannot see Jude Law as the hulking Wolfe.