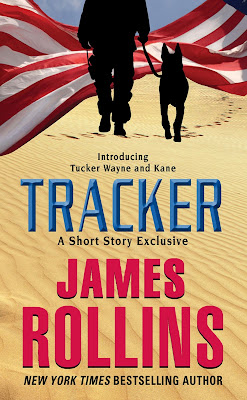 This is another of those short e-book originals designed mostly to promote the full-length books by various bestselling authors. I've read only one book by James Rollins (SANDSTORM), but I liked it pretty well. In TRACKER, he introduces a couple of new protagonists, a former soldier named Tucker Wayne and Tucker's German Shepherd Kane, who worked with him in Afghanistan. Tucker left the service after some unspecified tragedy and took Kane with him, and now they wander around the world and wind up in dangerous situations when Tucker tries to help people who need it.

They're in Bulgaria for this one, and when Tucker sees a beautiful blonde being tailed by three thugs, he and Kane take a hand. I don't think it's giving too much away to say that there are various factions after a fortune in gold looted by the Nazis during World War II. Yes, it's that plot again. There's some nice action, though, in and underneath a creepy old cemetery.

It would be easy to indulge in some snark and say that this is Jack-Reacher-with-a-dog, but actually, although that's an accurate description in some ways, Rollins is a good enough writer to elevate it above that. He's an admitted fan of Doc Savage (he used to be a veterinarian before he became a bestselling writer, and I believe he said he had the entire Bantam series on a shelf in his office), and a little Lester Dent may have rubbed off on him. This story moves along nicely. I really like the characters of Tucker and Kane, too. Being a dog lover, I was inclined to enjoy this one to start with. Tucker and Kane have gone on to appear in one of Rollins' Sigma Force novels (his main series) and in a collaborative novel by Rollins and Grant Blackwood, THE KILL SWITCH. I have that one and will probably give it a try at some point, although it's longer than I prefer. For now I can say that TRACKER is a very quick read and that I liked it.

I, too, have enjoyed these books and hope there will be more to come in the series. I hadn't known about the Doc Savage connection but now that you've mentioned it, I can see it through other James Rollins works. He just went up a notch in my pantheon of authors!

Tried one of his novels but couldn't get through it. Too many unread books for me to waste it on bad writers.

Steve,
If you'd said "writers whose work I don't care for" instead of "bad writers", I'd agree with you wholeheartedly. I've come to believe that any writer who can entertain people has to have something good about their work, whether I can see it or not. I just don't have to read the ones who don't entertain me. Which, in a roundabout way, is pretty much the same thing you said.