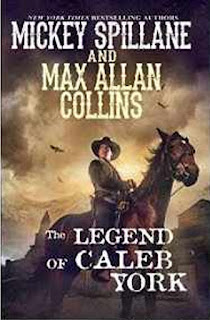 Mickey Spillane certainly isn't the first name I think of when the subject of Western movies comes up, but as Max Allan Collins explains in his introduction to this novel, Spillane was good friends with John Wayne and at one point even wrote a screenplay for Wayne's production company Batjac. That movie was never produced, but Spillane's screenplay serves as the basis for this novelization by Collins, another top-notch posthumous collaboration by these two writers.

THE LEGEND OF CALEB YORK is a very traditional Western featuring many elements you've seen before: despicable villains in the person of a corrupt sheriff and his crew of brutal deputies/henchmen; the frightened citizens of the town treed by said sheriff (in this case, Trinidad, New Mexico); a sultry saloon owner who's no better than she has to be; an old rancher and his beautiful daughter; an eccentric old desert rat reminiscent of the immortal Gabby Hayes (yes, Spillane and Collins follow The James Reasoner Rule, as Bill Crider has dubbed it); and last but certainly not least, the mysterious stranger who rides into town and sets off a bloody chain reaction of events. The crooked sheriff has his sights set on both the old rancher's spread and the man's lovely daughter, and the rancher has sent a telegram asking for help from the notorious gunfighter Caleb York, or rather, when he finds out that York has been reported dead, the man who gunned down York.

So who is the mysterious stranger? Spillane and Collins make us wait almost until the end of the book to find out, and this twist, along with Collins' fast-paced prose, elevates THE LEGEND OF CALEB YORK into a fine Western novel. It's an entertaining tale filled with gritty action and interesting characters, and I hope there'll be a sequel or two. I'll certainly read them if there are. If you're a Western fan and haven't yet read THE LEGEND OF CALEB YORK, I recommend it.

Sounds interesting but I won't be reading it until that inflated price comes down. By a lot.

Too right, Peter. Sounds a lot like something you or I might have written, but I guess it all comes down to having the right name on the cover. At a modest $2.99, Chap O'Keefe ebooks barely pay for the time spent in formatting and producing appropriate covers. As for sales made one by one through social media, that's an experiment that holds no appeal whatsoever.

Guys, I have no control over the pricing though I have always encouraged Kensington to bring their e-book prices down (I also do a mystery series there, with my wife Barbara). They occasionally do lower them and sometimes run a sale.

There is a very good audio book of CALEB and if you're part of the Audible program, it's only one credit. And there will be a paperback next year.

Assuming from reading the generous Reasoner review that you could have written just as good a book seems a bit of a jump to me. And authors who have name recognition - like Mickey Spillane and, to a lesser degree, myself - have earned it.

I'm sure it's far, far better than anything I could come up with in my wildest dreams.

I'm just saying it's way over-priced, and over-pricing an ebook just really rubs my fur in the wrong direction.

But for all my blather, I've ordered the damn thing yesterday. I couldn't resist a western by the Grand Master--even if it's a novelized screenplay--and have always secretly hoped for one. But rest assured I ordered paper! And it better live up to expectations or you owe me a six-pack, Max!

I always tell readers I provide a money-back guarantee on all my books, except for the money part.

Glad you went with paper.

Max, For the record I didn't "assume" I could "have written just as good a book." What I said -- going by the character and plot elements James mentioned -- was that your book sounded a lot like something Mean Pete or I could have written. At the moment I don't have the discretionary spending power (bluntly, the money) to see just how good the book is. As for how good my own books are, I'll leave that for readers to decide. Like James, some have been kind enough to leave pretty flattering reviews here and there, but it makes little impression on the market at large. Buyers make cautious choices based very largely on name recognition built up over decades. I don't blame them; nor am I saying I haven't toiled for decades myself. As Terry Harknett (George G. Gilman of Edge fame) once pointed out in The Writer magazine: "Successful writing is two percent inspiration, forty-nine percent perspiration and forty-nine percent luck."

Meaning no disrespect, the luck comment from Terry Harknett is fairly ridiculous. No question that luck plays a role...but that includes bad luck. I've had a couple of really lucky breaks, but I've also been subject to numerous disasters not of my making. When good luck comes, the pro makes the most of it. When bad luck comes, the pro digs in and keeps at it. I would say talent is somewhere between 2% and 10%, luck of both kinds maybe another 10%, and the rest is hard work and persistence. I started sending books out in junior high, in the early '60s, and sold one in college in 1971, and have kept at ever since. Another aspect worth consideration is not limiting yourself to a genre or even just to fiction; over the years I've done everything from comic strips and books to trading cards to non-fiction to movie and TV tie-in's. That's because "inspiration," for the fulltime writer (which I've been since 1977), is the pile of bills that roll in every month.

Some writers are very lucky, and most of them -- those who hit an early success -- have no idea how lucky they are. That's frustrating to the rest of us. But even they have to stay at it and keep writing and improving, or they'll be in the trenches with the rest of us...or, most likely, will give up.

And no disrespect to you either, Max, but you didn't have to tell me how it is. I believe I am some years older than yourself; also I've spent a working lifetime earning such living as I've had via the written word. Therefore I resent your implication I'm not a pro. From leaving school, I never did any other sort of work (which may be regrettable). I started work in the detective fiction genre in London (Sexton Blake series), moved on to scripting and editing comic books, plus writing short text fiction in many genres, before moving to New Zealand in 1967.

That was a lifestyle choice made by my wife and myself, and we never regretted making a home and raising three successful children in the NZ environment. It did, however, mean a change of career direction for myself. NZ had little or no publishing of books and comics, so I earned the money to make our lives possible by spending decades in newspaper and general magazine journalism. It was demanding "work for hire" that produced the money required, but didn't provide any literary property you could later call your own. Little time was left for fiction writing, although I did make the occasional sale of a comic-book script or "confession" story to US and UK publishers.

Since you don't seem to know, I am the author of 25 western novels as Chap O'Keefe, all of which have been published traditionally in at least two editions. In recent years, in semi-retirement, I've reissued a dozen as ebooks via Amazon. Without leaving this blog, you can find reviews of some of them.

Just as James has enjoyed your/Spillane's western, he has also enjoyed many of my own, and commented thus, here and elsewhere, in similarly generous terms. It is therefore not "a bit of a jump," as you put it, to compare my westerns with the one he has reviewed for you.

To finish, here is a quote from another US reviewer: “I always enjoy a skillfully written cross-genre novel. Chap O'Keefe's Sons and Gunslicks is a Western/Mystery that manages to hit the right notes in both genres.... Dillard himself is a great character, almost a frontier Mike Hammer, who doesn't take crap off anyone and isn't above beating up thugs for information when ratiocination fails. He's also a standup guy who's looking out for those who can't look after themselves, the classic tough/tender sleuth in a Stetson and duster.”

Nothing in my post suggests that you yourself are not a pro. It's a discussion of the role of luck in the professional writer's life, a subject you raised. You are reading in.

No, I am not familiar with your books. I read very little contemporary fiction, because (a) I don't wish to be influenced, and (b) most of my reading time is taken up with research for my historical thrillers.

You seem to have had (and are having) a long and successful writing career. Congratulations.