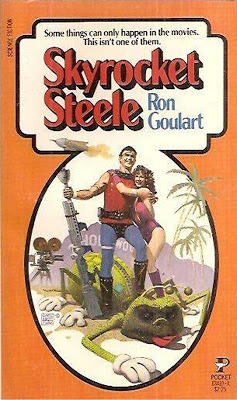 I've been reading and enjoying Ron Goulart's novels for decades. He's best known for his science fiction, I suppose, but he's also written quite a few mysteries (including a good four-book series about a California private eye named John Easy), various novelizations and tie-in novels, and a few Westerns. He also edited the iconic anthology THE HARDBOILED DICKS, which introduced a lot of readers of my generation to the great hardboiled detective authors from the pulps, and wrote several volumes of pulp and comic book history.

SKYROCKET STEELE is one of his science fiction novels I'd never read until now, and it's great fun. Although it's definitely SF, except for a few hints here and there that element doesn't really come into play until late in the book. Most of the way it's a funny, well-written account of making a science fiction movie serial called "Skyrocket Steele" in 1940. The protagonist is a young writer named Pete Tinsley who's been selling stories to the pulps for several years (he seems to have contributed mostly to the "Stimulating" line – STIMULATING WESTERN, STIMULATING SKY STORIES, STIMULATING ADVENTURE, etc. – a nice homage to the "Spicies"). Hired to help an experienced scripter come up with the screenplay for "Skyrocket Steele", Pete makes a very likable hero as he discovers some odd things going on around the production.

Throw in some Hollywood gangsters, a beautiful dancer named Boots McKay (great name), an equally beautiful redhead named Tracy Flinn who may or may not have some abilities that aren't quite normal, and some Nazi saboteurs, and you've got an excellent screwball adventure yarn that winds up with a burst of nice pyrotechnics.

This book came out in paperback from Pocket Books in 1980 with a cover by Carl Lundgren and has probably been out of print ever since, but it's well worth seeking out. I had a fine time reading it, and I suspect a lot of you would, too.
Posted by James Reasoner at 6:00 AM

I read this when it came out and remember really enjoying it. may be be time for a reread.

It's available at Amazon.com for the Kindle for $2.99.

I've read some Goulart but not this one. I didn't know it existed.

I think this is Goulart's best book.

Goulart was having some fun with "Steele" character names about then, with his "Steele Wyoming" stories as well. A man whose consistency and prolificity probably have hurt him more than helped, since unlike, say, Wodehouse, he hasn't developed sufficient audience to keep at least a good chunk of his work before the public...and people might well confuse one novel for another, by packaging alone (Did I read this one?)...

Ron was one of the first writers I met in this business at BCon 4 in Boston in 1973. Very helpful. Years later I read the first Tekwar book "written" by William Shatner and I KNEW it was written by Ron. I saw him at a cocktail party and asked, "What's it like writing with Shatner?" He asked, "How did you know?"

I LOVED the John Easy books.

Like Richard I recognized Goulart on the Tekwar books immediately. It was "nice" of Shatner to give him thanks later on in the series.