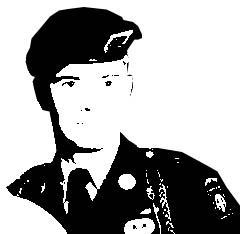 Who are your favorite Native American heroes of fiction and film?

If you needed a two-fisted, straight-shooting sidekick, Tonto or Chingachook would probably get the nod. Maybe Posey from The Dirty Dozen or Ben Yazzie from Windtalkers. But what about heroes with the clout to stand on their own, outside of anyone else’s shadow? What about heroes who cast a shadow which other men fall under? Off the top of my head, I would have to nominate Billy Jack, Thunderheart, and Louis L’Amour’s Hondo. (The title character of Geronimo: An American Legend, played by Wes Studi, is disqualified for being historic, not fictional. Besides, he's more of an anti-hero.) 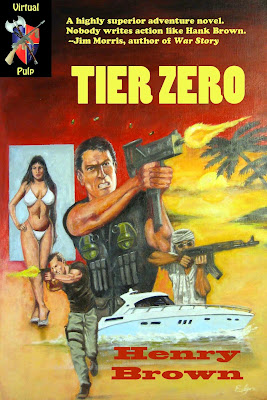 I'm pleased to announce the list may have recently grown by one with the release of Tier Zero. Tommy Scarred Wolf, a Special Forces Gulf War vet, takes over the spotlight in this men's adventure novel, leading a posse of 21st Century gunslingers in a running battle with human traffickers, pirates and a secret team of assassins.

Tommy first appeared in the paramilitary novel Hell and Gone. His genesis came about something like this:

In 2002 I was inspired to write an old-fashioned commando tale--sort of a throwback to the Alistair MacLean novels of WWII. The adventure took place in the Sudan. Since this was a clandestine mission, and the ethnic makeup of that country is mostly black or Arabic, the commando unit had to be composed of shooters who could blend in with the local population. A few black operators were recruited. A couple Hispanics. A Hawaiian. A Lebanese-American. And some veterans of Mediterranean descent--a Greek, an Italian and the Sicilian commanding officer: Dwight "Rocco" Cavarra.
I wasn't about to leave Native Americans unrepresented; not when they've volunteered to fight for the USA in such disproportionately huge numbers compared to any other demographic during every war fought since 1898.

I'd been a civilian for a while by 2002, but I felt a kinship with veterans I didn't share with most people. Me and other vets sort of gravitated toward each other, you could say. One of them I spent some time with was a Shawnee veteran of the 101st "Screaming Eagles."

For those who don't keep track of such things, be advised that the 101st Airborne Division ceased being Airborne in all but name after Vietnam--transforming to "Air Assault"--a glorified air mobile/heliborne formation. I had been a paratrooper in the 82nd ("All-Americans"-- the only true airborne division left in the US Army), and never tired of reminding him that both of us might have had the "Airborne" tab above our unit patches, but only mine meant anything.

Yeah, I was a jerk. And he was a really good sport about all my teasing. Anyway, one time I mentioned a souvenir I got from one of the prisoners my platoon captured. I still kept it with me, all those years later, even though none of my family or friends could understand or appreciate its significance to me. The epiphany came when he pointed out that the souvenir was actually a coup trophy.

With an interest in history that continues to this day, I had read enough about the "Indian" Wars to understand the concept of counting coup. But I had never made the connection between that and my souvenir-collecting habit from my infantry days. I grew obsessed with the matter for a time, and pumped him for information. So far as I know the Shawnee were never in the practice of counting coup, yet he seemed to be very knowledgeable on the subject. Tommy Scarred Wolf was conceived during this epiphany.

Tommy’s parents failed to pass down a connection to his warrior heritage. He desperately craved that connection as a child and young man. Unlike his brother, Vince, he clung to his dream and pushed himself to become a fighting man of distinction. He also adopted customs of red men from generations long past--counting coup in particular. No, he doesn't scalp enemy soldiers. He does pretty much what I did--taking enemy knives, boots, unit patches, etc.

It's probably a horrible cliché to say something like this, but as the first draft of Hell and Gone was written, Tommy Scarred Wolf took on a life of his own. He and another character stole the show: bringing smoke, taking names, and out-John-Wayne-ing pretty much every other bad mamma-jamma involved in the mission. Unlike the other character, Tommy survived.

It was years later before Hell and Gone finally got published. Then, almost from the start, readers began to ask me about a sequel.

A sequel hadn't even occurred to me. If it had, I probably wouldn't have killed off so many characters. I certainly wouldn't have painted myself into a corner, plot-wise, as I did.

I didn't take the sequel suggestions seriously, at first. But the seed was planted.

A South African Facebook chum who was an SOF (Special Operations Forces) vet, and involved as a PMC (private military contractor) in the sorts of things I wrote about, bought the paperback edition of Hell and Gone. Don't ask me how he found the time to read it. Of course I was curious what he thought of it, but the only thing he ever said was, "You should write a story about pirate hunting."

The seed was watered.

Other motivations manifested, and I also saw the genre enjoy resurgence, made possible by the e-book revolution and the explosive growth of indie fiction. I made note of what fans of the genre liked and wanted; what was important to them and what wasn't. My level of expertise in marketing and networking grew from Blind Bumbling Boob to Novice New-wave Nebbish. Over the same period of time, an idea grew.

When I was finally ready to put Tier Zero on paper (er, hard drive, I mean), there was no doubt in my mind that Tommy Scarred Wolf would be at center stage this time. And my confidence in him was justified. He took the bull by the horns and proceeded to break its friggin' neck.

In the case of both Hell and Gone and Tier Zero, the kind of adventure I wanted to read was nowhere to be found...so I wrote it myself. The same can be said for the type of hero I long to see kicking the bad guys where it hurts. Time will tell whether or not Tommy Scarred Wolf joins the short list of iconic Native American heroes in popular culture. I think he's long overdue.

If you're new to the Men's Adventure Blog Tour, Visit Hank's Two-Fisted Blog to find the schedule, the prizes and the ways to win!

(My review of TIER ZERO will coming up tomorrow. -- James)
Posted by James Reasoner at 12:30 AM

Awesome. I'm about a third of the way through Tier Zero, and it's a great adventure story.

An Indian with "clout," you say? Great pun.

Another thing: I didn't know that the 101st wasn't airborne anymore. When I was at Fort Campbell, their home, they used to disparage any non-airborne troops, calling us legs. We, in turn, called them birdshit. And as engineers, our unofficial slogan was, "We don't walk." They had to walk everywhere.

Thanks Jack! I tried to pour on the heat in ever-hotter doses as the story marches on.

Tonto is the mac daddy of sidekicks!

Yeah, the 101st rappell out of choppers now. They don't like to be called legs, but most of them are.

From the Novel and Mini-Series Centennial -- I liked Lame Beaver

Can't believe no one has mentioned Henry Standing Bear from Craig Johnson's Walt Longmire series (the books much more than the TV series).