[Here's an excerpt from the email Joel mentions in his comment on the previous post, with a few additions from me in italics.]


Poking around in boxes and file cabinets while looking for something else, I came across an ancient photo copy of the instructions Dad wrote for me. I'd like to warn you it is possibly politically incorrect. In addition, it may well come through to some fans of Westerns that my father scorned the genre and the fans.
To explain: at the time Dad was attempting to get one of his major novels for S&S finished, finish several other contracts, and still maintain the Westerns as a way of bringing in steady cash. He was paid about $3000 per Fargo and a similar amount would come in from the sales in Norway and much of the rest of Europe. Demand for Fargo and Sundance was there but there simply was not enough of Dad to go around. I do not recall the name, however, there was an author in upstate NY who started a number of pulp (non Western) series and farmed out the work to nearly 20 ghost writers on contract.  Dad was looking to build up something along those lines as well. [Joel and I have since established that he was talking about Lyle Kenyon Engel of Book Creations Inc. -- a company for which I wrote about 50 books.] 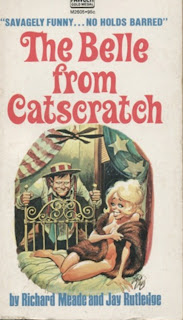 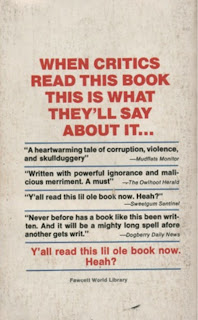 By this point Dad had written a lot of Westerns and other pulp to support a wife, three sons, and make a mortgage payment. He was just plain tired of writing Westerns for a while. The irony is, of course, his love of writing started because of his love of Westerns.  He faithfully followed the serials at the movie theaters and listened to the radio shows and read the pulp magazines of Westerns. It was with a sale of a Western story he got his start. He took annual trips to the West with my godfather and his best friend, Jim Henderson, an editor at the Norfolk Virginian Pilot. [Ben Haas wrote the comic novel THE BELLE FROM CATSCRATCH with Jim Henderson, both of them using pseudonyms, Richard Meade and Jay Rutledge, respectively. I have a copy of the book and hope to read it soon. The cover art, by the way, is by the great Jack Davis of MAD Magazine fame, and Joel sent me these scans as well.]
Dad craved recognition as a non pulp writer. Living well outside the orbit of NYCity and not able to teach at a university as he had no college degree, he probably never had the social connections for lightening to strike until the last four months of his life when a huge paperback sale of his final novel THE HOUSE OF CHRISTINA occurred. Even then, it was not reviewed widely by the major papers because it was a straight forward story. He remained a "mid list author" all his professional life and by the time he was 49, fat, and bald he was professionally interested in moving past writing paperbacks.
[Another bit of irony is that many of the literary writers from that era are forgotten and unread, while at least some of us are still reading, enjoying, and talking about books by Ben Haas and other authors like him who were great storytellers.]
Posted by James Reasoner at 2:02 PM

Great post, and your last, poignant comment is well said, James. Not a used book store goes by that I don't scan the shelves for Haas or Benteen.

I agree with Richard Prosch. A number of writers who wanted to be literary wrote books now forgotten--"Max Brand" comes to mind. My favorite book on being an artist--ART & FEAR--points out nearly every artist churns out a good deal of mediocre work so that they can create masterpieces--it is sort of paid practice. We can never know when we will create a masterpiece. It is certainly hard to deliberately set out to make a masterpiece. Some artists don't know how far they have succeeded. Gutzon Borglum was terribly disappointed his giant presidents in South Dakota remained unfinished. Michelangelo died at 89 with the bitter regret he never finished the Pope Julian's tomb, never mind the Pieta he made at 26. Finally, it is hard to work against type. I attempted for a number of years to create "serious" sculpture, quite competent large steel abstracts, yet later, I found my vein of gold and people loved and were delighted by my scrap steel creatures, garden gates and breathtakingly beautiful angels. I'll never be Albert Paley or Anthony Carro, only admire them from a distance, but I know people will be enjoying and seeking out my work long after the "names" have gone out of fashion. Dad never appreciated fully that his strength was storytelling, not fancy phrasing and literary allusions.