How to Write a Pulp Western - Ben Haas

Joel Haas was kind enough to send me scans of his father's instructions on how to write a Western novel. I think this is fascinating reading and contains much good advice. Many thanks to Joel for sending this document along. You can click on each of the scans to enlarge them enough to read. Warning: there are spoilers for several of Ben Haas's novels in these pages. 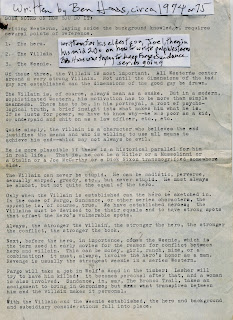 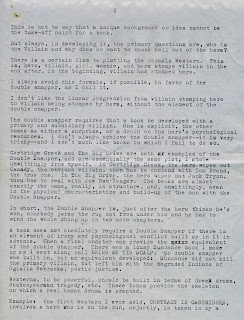 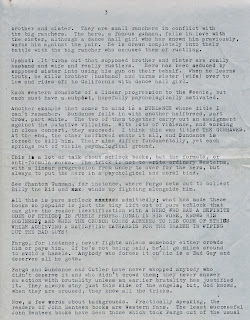 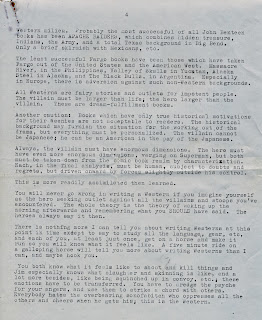 "All westerns are fairy stories and outlets for impotent people." Thanks, Ben, for clearing that up.

Ron, I was concerned several of Dad's comments would make fans bristle, but decided to let it all go unedited. I hope James will post some of the email I sent along with these scans some time soon. In 1974, a relatively more polite age, impotent seldom meant anything sexual or derogatory. In his context, it meant powerless. A more accurate understanding of his meaning might be stated "Escapist stories for people without an escape." Dad DID write about impotent--powerless-- people in all his major works for S&S. He examined the fairy tales their rulers told them to keep them in their place. In THE FORAGERS, the civilian populace is powerless against the CSA captain seizing their food and paying with worthless money; in LOOK AWAY, LOOK AWAY, blacks in the South were told fairy stories as were poor whites to keep everybody in their place; the same is true in THE LAST VALLEY in which poor mountain farmers are helpless to keep their valley from being flooded for an electric damn to power an aluminum factory; in DAISY CANFIELD, Danny Rush, a depressed and broken down sheriff finally attempts to take on powerful real estate developers who have murdered a young girl---and he fails; THE CHANDLER HERITAGE is classic as a tale of impotent people--the myths textile mill owners told their poor white labor about racial superiority and enlisting Baptist churches' fire and brimstone God to keep the workers docile. Powerlessness on a grand scale was looked at in his final novel THE HOUSE OF CHRISTINA, examining the propaganda the Nazis used in taking over and controlling Austria in 1938-45.
Ironically, Dad was sort of powerless himself; no matter how many full page ads for his novels appeared in the NY Times Book Review magazine, no matter how much money he made, he never got recognition he craved from the literary establishment.
All explanation aside, I did have to smile at your, "Thanks, Ben, for clearing that up." Dad would have laughed at that himself. All the best, Joel Haas, sculptor

Wow! Thanks for posting these pages. I disagree with a lot of it but it's interesting to see Haas' take on it. I've read a few of his books and like the hard-boiled style but the fact that the characters are so crudely developed, and one-dimensional, limits them and the books themselves. But they were written at a different time, for a different audience, and no one wrote action better!

More here in four typewritten pages than you'll find in many a scholarly writing manual. And you know the advice works, too!

Nothing short of fascinating, Joel. Thanks for sharing.

Thanks for sharing this, Joel and James. This is, as David says, fascinating. Much appreciated.

Thanks, Joel, for your informative post about your father's career and intentions. I did not read scorn in his comment about impotence or contempt for his readers; it was just such a dead honest way of making a point. It cut through the crap and spoke volumes.

Incredible, stuff, Joel and James! Many thanks for sharing. As Mr. Brandvold wrote, no one gave better action. Some of those scenes are branded in my head forever.

Excellent. I got a real kick out of these. Can't disagree on a lot of it.

As someone immersed in the creative arts, both illustrating and writing, I am always fascinated by any view into the mind of a fellow creator attempting to share their methods.

This is often difficult to do. To put into words the how, when and the why. Teaching makes you think in a manner of how to approach your methods and develop a way to share that information constructively so that another may understand it and build upon it. And this is speaking from personal experience as a former teacher myself.

Not everyone can do this. For example, many great athletes can perform on the field but are a wash out when hired as coaches.

Once in art school, I asked one of my instructors, a well-known name in the art community, why he used a certain approach. His reply: "Because it works."

This was very unsatisfactory because it allows no insight to their reasoning behind when to employ a certain approach or technic. Pursuing it further, I asked him: "Yes, I understand that, but why did you use it here and not there?"

"I don't know. Because it worked."

Begrudgingly, I let it drop. It became obvious he had no idea of the "when" or the "why." As an instructor he could correct your work, but could not teach you how to think because, in the end, his work was visceral and reactionary, not intellectual, designed as a slap you in the face viewing, not a calculated and planned one-two punch.

Many of we creators may use the crutch of "because it works" but it requires deeper thought to find the motivations of "when" and "why" in self-analyzing your own work.

Thank you Joel for allowing James to share them.

PS-- When vacationing in Mexicao last year I read Fargo: Valley of the Skulls because I thought it would be a hoot to read it where it takes place. I thought it was a great read and did not miss the standardized western setting in the least.

Years ago I spent three semesters teaching creative writing at the local community college and gave it up when I realized that I was too much of a "seat of the pants" writer and couldn't explain why some things worked and some didn't. I could probably do a better job of it now, but have no interest in doing so.

I think VALLEY OF SKULLS was a favorite of the ones I read. Great cinematic action novel. I can still remember how he wrote about a pack horse falling off the edge of a cliff, tumbling down and away so you could see the horse getting smaller and smaller before piling up on the canyon below. You really can't teach that. I don't think you can really teach much about writing at all. You either have an aptitude for it and read and read other writers until you hit on something that works for you. I don't mean to sound all breathless about it, but it's a very mysterious thing.

Thanks for posting these scans. Great advice and useful to any fiction writer.

Although I am not a reader of westerns and do not know of your father (this link was posted in a writing forum), I love this to pieces. Read today, this is basically a brilliant meta-essay about entertainment in general. That it was also a father telling a son about his trade makes it gorgeous.
I see people are bristling at some of the frankness of the content, but it's all the truth, and his self-consciousness about what seemed like simplifying and laying bare the fundamentals of his passion and life's work is very human. The last paragraph makes it clear how deeply the magic of Westerns resonated in him. This is an incredible thing to share. Thanks.