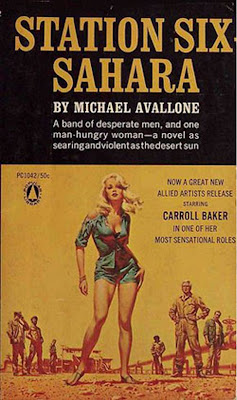 I remember when this book came out, as well as the movie on which it’s based, even though I never saw the movie and never read the novelization until now. I remember them because they both came out in 1964, when I was eleven years old, and that artwork featuring Carroll Baker was on the movie poster as well as the book cover. Yowza!


And since I never saw the movie, I can only judge STATION SIX – SAHARA as a novel. I’m happy to report that it’s pretty good. The story opens with German engineer Martin Donetz arriving at the Medina Oil Company Pumping Station Six, somewhere deep in the Sahara Desert. The station is manned – and I mean that literally – by several guys of various nationalities, all of whom are at each other’s throats due to the monotony and isolation of their existence. Another German, Kramer, is in charge of the station. There’s a wisecracking Australian, a stiff-necked former British Army officer, and an enigmatic Spaniard, plus some assorted Arabs. The first half of the book gives us back-stories and a steadily increasing sense of tension, then a beautiful blonde and her possibly sinister ex-husband show up to make all hell break loose.


Well, it never quite does, but there’s some nice suspense anyway. The legendary Michael Avallone plays it pretty straight here, as he did in most of his novelizations. There’s no sign of the goofy Avallone humor you find in the Ed Noon novels. Old pro that he was, he keeps the plot moving along briskly, or as briskly as he can considering the somewhat stodgy storyline he was handed. The movie itself was written by British authors Bryan Forbes and Brian Clemens (who worked on THE AVENGERS, among other iconic British TV series), and in a sign of how times have changed, the copyright of the novelization is in the names of Avallone, Forbes, and Clemens, rather than Allied Artists, the movie production company.


This is a fairly entertaining novel, not a classic by any means but worth reading. And it’s got that great cover art. Well, it was great when I was eleven years old.
Posted by James Reasoner at 6:00 AM

That brings me back, Mike Avallone penned several of the Novelisations of the Man From UNCLE books whihc I devoured in my youth, thanks for the memory

It's still a great cover. When I was around 14 years old, my Carol Baker moment was Baby Doll.

Mike Avallone, despite his faults, was a reliable, professional writer for most of his career. Avallone's ACE DOUBLE is a favorite of mine.

STATION SIX - SAHARA, as penned by Avo, was one of those rare cases where the novelization was far better than the material it was based on. With what he had to work with, Avallone made the storyline far more suspenseful and "racier" (once the Baker character showed up)than the movie. The movie, which I had the misfortune of seeing somewhere along the way was just plain boring and about as sexy as stale bread. Much as I enjoyed most of the Noon books, I have long maintained (and I shared this with Mike when I wrote a Foreward for the re-pub of his novel MITZI)that he actually did his best writing in some of his movie tie-ins and some of the titles he wrote for the "adult/ sleaze" market. STATION SIX was a prime example. And let's be honest, in spite of all the hype for HARLOW, CARPETBAGGERS, STATION SIX, etc., did *anybody* really buy Carol Baker as a sexpot on film? She looked great in still photos and publicity poses, but on screen she was scrawny, flat-chested, and had a tinny, fingernails-on-chalkboard voice that only Roseanne Barr could equal. Still ... that movie poster/book cover for STATION SIX sure was something, wasn't it?

That cover art is so distinctive from that era.

I almost rose to Baker's defense...until I realized I was conflating her with Carol Lynley. But BABY DOLL was pretty right for her in every way...

Perhaps the discipline imposed on Avallone's imagination and craft by such adaptations tended to help...

Yeah, I always thought Carol Lynley was better-looking than Carrol Baker, too.

I've never read any of Avallone's sleaze novels. I've got to do that.

Lynley may have been better looking than Baker, but not as sexy. Guess that Ice Princess persona--Lynley, Grace Kelly, Dina Merrill--didn't appeal to me. But still a great cover.

Avallone wrote only the first Man from UNCLE book, but also did things like Hawaii 5-0 and Felony Squad.

I've had a number of Internet arguments with another writer who was acquainted with Terry Carr, who edited those U.N.C.L.E. novels for Ace. This fellow says that Avallone's book was so terrible that Carr was forced to rewrite the entire thing in a weekend and has also expressed a belief that ALL of Avallone's books were heavily rewritten by their editors. I just don't buy that at all. If that was true (my argument goes), then why do all of Avallone's books read pretty much the same, regardless of when and where they were published and who edited them? It's his voice, for good or bad, that's in them, not the voices of a score of different editors.

But of course, as all Internet arguments go, it ended up a stalemate.

Pretty nice cover for us 12 year-olds, too.

First time I've seen the cover and agree it is still a winner.

My guess is that Avallone and the screenwriters shred the copyright either because
— the deal was crafted in league with a British publisher — until very recently, and even now in some instances, British tie-in novelists retained the copyright to their work, even though there might have been a separate copyright for the source material;
and/or
— because the screenwriters held the publication rights, and even if the deal was made through the movie studio, the studio had to honor its contract with them. I haven't (yet) seen evidence of a British edition, but I imagine there was one, or at least one that was planned and cancelled.