Forgotten Books: The Heritage of the Desert - Zane Grey 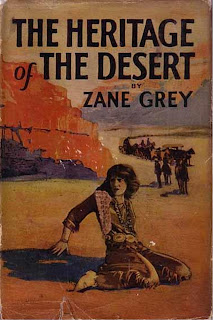 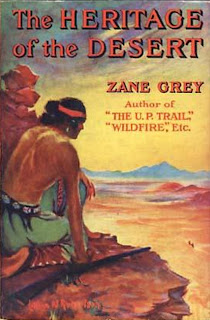 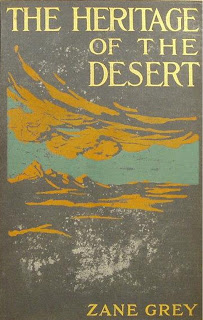 I found myself in the mood to read a Zane Grey novel, and since Ron Scheer reviewed THE HERITAGE OF THE DESERT a while back and it sounded pretty good, I decided to give it a try. I was interested in it as well because it’s Grey’s first real Western novel, first published a hundred years ago in 1910. Ron does a far better job of discussing the novel than I can, so I urge all of you to go and read his comments, if you haven’t already. As for me, I’ll use this as an excuse to wallow a little in nostalgia and ramble on a bit about Zane Grey.


When I was a kid, my mother did not approve of my choice of reading matter, and that’s putting it mildly. She was scandalized that I wanted to read those dirty James Bond books. The Nick Carter novels were just as bad. Of course, anything with a McGinnis cover drew a frown of disapproval. I came to be very fond of Dell Mapbacks, which were still very easy to find in used bookstores in those days, because their covers were almost always less risqué than the editions coming out in the Sixties. Then there was all that crazy science fiction stuff I liked, and those crazy pulp reprints, which weren’t as bad as the mysteries because they didn’t have racy covers, but they were still, well . . . crazy.


Westerns, however, were okay. (This was in the dawn of the Adult Western era, the Jurassic Adult Western era, if you will, when Belmont was publishing the first few books in the Lassiter series by W.T. Ballard, Peter Germano, et al., writing as “Jack Slade”.) Western paperback covers still looked respectable. They might be violent, but there was no sign of anything sexy. Books by Zane Grey were especially okay, because my mother had read Zane Grey and deemed them inoffensive.


Luckily for me, I liked Westerns. I had discovered Max Brand and Clarence E. Mulford on my own, and I was happy to try Zane Grey. The bookmobile that came out every Saturday from the library in Fort Worth had tons of them, and I read most of them: THE LOST WAGON TRAIN (the first Zane Grey I ever read and a candidate for a Forgotten Books post one of these days), the iconic RIDERS OF THE PURPLE SAGE, NEVADA, DESERT GOLD, THE HASH KNIFE OUTFIT, TO THE LAST MAN, THE DRIFT FENCE, UNDER THE TONTO RIM, and plenty of others. I found all of them quite enjoyable, but over time I became less of a fan of Grey’s work because the negative things you’ve heard about the books are true for the most part: the writing style is long-winded and overblown, the characters sometimes have incredibly goofy names, and the plots are full of melodrama, coincidence, and contrivance. Most plots from eighty to a hundred years ago seem that way to us now. While I would still read a Zane Grey novel from time to time and enjoy it, I found that I really had to be in the right frame of mind to appreciate his strengths as a writer.


Because despite the criticism, his work definitely does have its strengths. Yes, the descriptions of the landscape sometimes go on and on, but they paint vivid pictures and they do a good job of drawing a parallel between the setting and the characters. And you can call it melodrama if you want, but Grey puts his characters through hell and can really make the reader feel what they’re suffering. Finally, when he does get around to an extended action scene, they’re great, full of color and adventure and excitement.


But to get back to a few comments about THE HERITAGE OF THE DESERT, this is the old “sickly guy from back east comes west and toughens up” plot, with Jack Hare being rescued from death by Mormon patriarch August Naab and then getting involved in Naab’s range war against the rustlers Holderness and Dene. There’s also a romantic triangle involving Hare, Naab’s gunman son Snap (isn’t Snap Naab a great name for a gunman?), and the beautiful half-Navajo, half-Spanish Mescal, August Naab’s ward. The plot is a little thin, especially for the book’s length, and suffers from the way it meanders around. Those pacing problems may be because THE HERITAGE OF THE DESERT is one of Grey’s first novels. I seem to recall that the later ones flow a little better. There are some great scenes scattered through this book, though, such as the taming of the wild mustang Silvermane and a dangerous encounter with a bear. I guess I was in the right mood, because I was able to throw myself into the book as a reader and wound up enjoying it quite a bit, enough so that I plan to read something else by Zane Grey fairly soon.


If you’ve never read Grey’s work and you have a Kindle, a bunch of the novels are available free on Amazon. You can try one, and it probably won’t take long for you to tell whether or not you like it. There are also plenty of copies still available in most libraries, and you can still find lots of used paperbacks as well. And the best thing about those paperbacks . . . the covers aren’t smutty, so you can read them without being ashamed.
Posted by James Reasoner at 6:00 AM

My husband's grandfather read these around the clock. ALways claimed Louis was too fancy for him and Zane was just right.

I'm ashamed to say I've still never read Zane Grey -- I need to remedy this soon. Thanks for reminding me!

Judy read Grey in high school and has fond memories of his books. I didn't find his work until I was in my 20s, when I tried reading RIDERS OF THE PURPLE SAGE. Couldn't get past the first chapter, so Grey's not a part of my reading life. I did, however, really enjoy Frank Gruber's biography of Grey.

The fine covers of Zane Grey's "The Heritage of the Desert" left me drooling. I have never read a Zane Grey before though they were once within arms reach at my circulating library. I hope to lay my hands on one soon.

Bookmobiles! Bookmobiles! That one word transported me back to my eight-year-old self, a just arrived English immigrant to this strange land where I didn't fit, and the bookmobile at my elementary school became my refuge. I can still remember clearly taking down specific novels from the closepacked shelves and losing myself in them. Wow! Thanks for the flashback!

Not a huge reader of Grey, this post did bring back somwe fond memories of my grandfather. He was a Grey fan and when he passed in the late seventies, Grandmother gave me three books he prized. One was the Bible(with his name in gold leaf on the cover), a 1934 edition of Kidnapped, and a first edition of Under The Tonto Rim. It;s not in prime shape, no dust jacket either, but I wouldn't take anything for it.

The bookmobile was where I was introduced to so many of the authors I still read. I wouldn't take anything for the memories I have of it.

My grandfather had loads of them. I remember looking through his stacks. Some Zane Gray, Louis L'Amour, and Mike Shayne.

Like Bill and Randy, I never found Grey terribly engaging, having first tried him, I think, not long after he was name-checked on the M*A*S*H television series (the Potter character loved his novels). Even the abridged reprints of his work published in ZANE GREY WESTERN MAGAZINE, when I eventually discovered that magazine (I was first made aware of it, I think, by the STURGEON'S WEST collection)...well, they couldn't hold a candle to the original stories included. But I'm certainly glad that magazine (and even the Leo Margulies revival) existed, so to that extent at very least, hats off to the man and his legacy.

My father did not care for my choice of reading material (mysteries and science fiction) and kept after me to read some "good books". To him, that meant Zane Grey and no one else.

I've only read a few by Grey
(and enjoyed them), but there was a time when I went through the "Rohmer Zane Grey" stories (from the Margulies magazine) like peanuts. (Wildside, I believe, has published a few of these that Bill Pronzini and Jeff Wallman ghosted.)

You make a good case for old Zane, but I doubt even smutty covers could make his style palatable to me.

Thanks for revisiting this novel. It was fun to read your take on it and Grey himself. This one is almost his first published novel, and it shows. For me, the long, rambling opening is one problem. I've read maybe 20 westerns from this period, and it's the only one that tells its story from the point of view of only one character. That's the other problem. I plan to read RIDERS OF THE PURPLE SAGE next to see what he learned from HERITAGE OF THE DESERT.

Read zane grey. Not as good when you look at others who never did see much of the west. Oliver Strange for example from the same era had much better fare with Sudden. Got to read the original 'Ned Buntline' if someone can find any of his stuff. A lot of the traditional stereotypes / nicknames - wild bill hickok, wyatt earp etc stories - started with him.

Zane Grey often read like a tearjerker soap opera set somewhere out west - without the vaguest idea of what the west looks or ever looked like.

[never mind the newer crop - Terry Harknett, JT Edson etc .. those were good in their own way, addictive the way mcdonalds is]