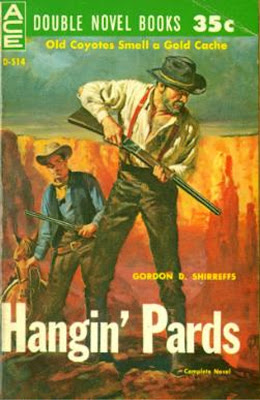 Gordon D. Shirreffs was one of the most consistently entertaining hardboiled Western authors for many years. I’ve read quite a few of his books, and they’ve all been good. I’d never heard of this novel (which is half of an Ace Double, with the other side being Shirreffs’ RIDE A LONE TRAIL), but when I ran across a copy, I certainly didn’t hesitate to pick it up. So far, I’ve been well rewarded for doing so.


The protagonist of HANGIN’ PARDS (a great title, by the way) is Holt Deaver, a young man who has drifted onto the wrong side of the law on occasion but isn’t exactly a hardened owlhoot. As the book opens, he’s running from trouble. The men he was riding with robbed and murdered an army paymaster over Holt’s objections, and they’ve decided that they need to kill him in order to keep him from ever turning them in. He had to gun down one of the bandits to get away from them – not the first fatal shooting scrape he’s been mixed up in –and now the rest of the gang is closing in on him. Think things can’t get any worse for our boy Holt? Of course they can.


That’s what happens when he runs into an old outlaw named Cass Riker who has even more trouble on his trail. It seems that Cass has just been released from Yuma Penitentiary, where he served fifteen years for a Wells Fargo robbery that netted him anywhere from eighty to a hundred and twenty thousand dollars. (The number keeps changing depending on who’s telling the story.) Cass is the only one who knows where the loot is hidden, so his former partners – who he may or may not have double-crossed – are trying to catch him so they can torture the location of the money out of him. Since both of them are in trouble, Holt and Cass throw in together, of course, with Cass promising Holt a share of the loot if they get away.


There’s nothing particularly original about this plot, but the joy of reading Shirreffs’ work is in his mastery of pacing and his tough, gritty prose. The action scenes in his books are as hardboiled as they come. Plus his descriptions of the rugged settings are vivid without being long-winded and really capture the Arizona landscape. The final showdown takes place at night in an eerie ghost town and is very effective.


HANGIN’ PARDS doesn’t break any new ground, but it’s a pleasure to read and packs plenty of excitement into an economical 40,000 words or so. If you’re a fan of tough-minded Westerns, I highly recommend it and just about anything else by Gordon D. Shirreffs. (And every Shirreffs-related post has to include a mention of his CALGAICH THE SWORDSMAN, one of the best historical fantasy novels I’ve ever read.)
Posted by James Reasoner at 6:00 AM

I have no idea what "pards" are.

Patti, it's cowboy lingo for partners.

You've got me wanting to dig out one of the many Shirreffs books I've got piled up around here somewhere. Like you, James, I've yet to read one I haven't enjoyed.

I've been a fan of Gordon D. Shirreffs' work, but I haven't read this book. I'll have to dig it out and read it. I love the cover! My favorite Shirreffs novel is THE SECRET OF THE SPANISH DESERT. But I have a dozen or so Shirreffs novels still to read.

Sheriffs was one of those reliable writers who every so often would give you an extraordinary book. I must've read thirty of his novels.

Thanks, Randy. (and Todd)

Some of the used book stores I frequent have lonely-looking Western sections. I've picked a few titles at random, but they've been pretty formulaic and bland. Could anyone recommend any reliable authors for good, solid hardboiled/noirish Western novels?

I just finished a Shirrefs' book myself, BOWMAN'S KID. Good hardboiled protagonist with a reputation as a vicious manhunter, yet with a strong sense of honor.

James - I agree, Shireffs was one of the best. I especially liked his Lee Kershaw, Manhunter series. Interesting that you used the term "hardboiled" in describing his books --- couldn't agree more. The term is generally applied to the detective/mystery genre but I've always maintained that there is a hardboiled side to almost every genre (Conan is hardboiled fantasy, for example) and Shireffs nailed it better than anybody when it came to Westerns.

Wayne,
Yeah, I believe it was Don Herron who first said that Robert E. Howard combined not only fantasy and horror to create the sword-and-sorcery genre, but that there was also an influence from the hardboiled crime fiction of the era as well. Not surprisingly, some REH fans I know are also Shirreffs fans.

I read Shirreff's stuff as a kid, and remember BORDER GUIDON quite vividly.

Count me among the Sherriff fans. Wish I had all his books. Guess I'll have to search Alibris. Love the way he makes his hero's suffer. I think that rubbed off on me as some of my readers say they'd never want to be in one of my books, I'm too hard on the protagonist.