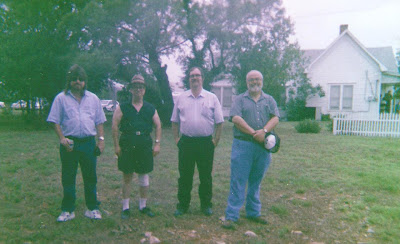 This morning my friend Tom Johnson posted this photo on one of the Yahoo Groups we belong to.  It was taken in Cross Plains, Texas, at one of the annual Howard Days get-togethers.  The absence of the pavilion behind the house tells me the picture was taken sometime around 1996 or 1997.  Left to right in the photo are Charles Gramlich, Tom Johnson, Aaron Larson, and me.  Those were great times, but then, any visit to Howard Days is a lot of fun.
Posted by James Reasoner at 2:18 PM

Wow, you and Charles Gramlich in the same photo. This has got to be a collector's item.

Sounds like good times, I am gonna do my best to be there next year.

Don't we look like SOME motley crue. Or mabye like a boys band from the 50s gone to seed!

Charles,
I'm trying to imagine the four of us singing and dancing. It's not a pretty picture.

George,
Oddly enough, though Bill has been to the Howard House, he and I have never been there at the same time. We'll have to remedy that one of these years.

I can't help but say that four women would stand a lot closer to each other.