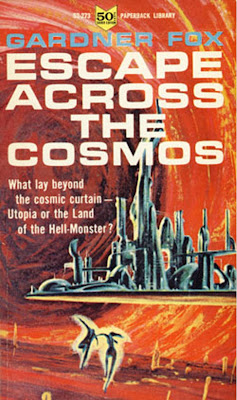 Return with us now to the days when rocket ships had fins and square-jawed heroes carried positron ray guns. Gardner Fox’s ESCAPE ACROSS THE COSMOS has all that and more. It opens with the hero, Kael Carrick, being marooned on the prison planet Dakkan, which is actually more of an execution planet because it’s totally barren of life and anyone left there with no supplies is doomed to death by lack of food and water. This is how the Empire deals with prisoners convicted of murder. Carrick has been convicted of killing the famous scientist Hannes Stryker, who had saved Carrick’s life by rebuilding his body after the former soldier was gravely injured during a battle against an alien race. Carrick’s brain was the only thing preserved, and Stryker was able to regrow a new synthetic body around it. Got all that? This is back-story from before the book even starts. 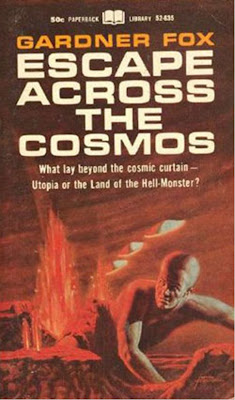 Obviously, Carrick was framed and didn’t really kill his benefactor, but he’s left to die on Dakkan anyway. Luckily for him, the planet isn’t as bare of life as everybody thinks it is. It’s actually the secret hideout of a society of criminals (this isn’t too much of a spoiler, as it’s revealed very early on) and Carrick falls in with them. Eventually he escapes and sets out to discover who really killed Hannes Stryker and framed him for the crime. Naturally the beautiful blond crook who has fallen in love with him comes along, too.


At this point, ESCAPE ACROSS THE COSMOS takes on a certain Gold Medal-ish “man on the run” feel, despite the science fiction trappings. Fox isn’t content to leave it at that, though. Instead he piles on a conspiracy that threatens the entire galaxy and a heapin’ helpin’ of Lovecraftian horror, along with a lot of colorful, pulpish action, and it all winds up in a fine showdown with the real bad guys. Yes, it’s mostly silly, hokey, very dated stuff, and most modern SF fans would read a few pages, laugh or sneer, and toss the book aside. But if you grew up reading this sort of hardboiled adventure science fiction like I did, ESCAPE ACROSS THE COSMOS is a lot of fun indeed. It’s also about 50,000 words, instead of a bloated trilogy five or six times that long.


Gardner Fox is probably best known for writing comic books, and he turned out some of the most important, influential stories in that medium, most notably “Flash of Two Worlds”. But he was also a prolific pulpster, turning out many yarns for PLANET STORIES and the like, and he also produced a lot of paperback originals in various genres and under various pseudonyms. He was one of the best at swashbuckling historical adventures, and he created and wrote a well-remembered sexy spy series in the Sixties, THE LADY FROM L.U.S.T., under the name Rod Gray. I’ve found his paperback work to be inconsistent but have enjoyed many of his books. ESCAPE ACROSS THE COSMOS, published by Paperback Library in 1964, may have been an expansion of a pulp story, but if so, I couldn’t find any evidence of it. It shares some concepts with some of the comic book stories Fox was writing at the time, so I suspect it was probably an original. No matter what its origins, I found it to be an entertaining novel and well worth reading if you’re an old guy like me who doesn’t mind if the rocket ships have fins.
Posted by James Reasoner at 6:00 AM

Too funny. In my Forgotten Books Post today, I take a look at Three paperback original sexy-spy series Gardner was involved with including The Lady From L.U.S.T.

Gardner was as prolific as hell across so many genres, a true pulpster.

Paul Bishop is right about Gardner F. Fox's versatility. I enjoy his paperback work, both mystery and SF, but I think Fox made his biggest impact in scripting comic books like THE FLASH.

So many of the pulpsters moved on over to comics in the 40s and onward. I was pretty croggled to discover the David V. Reed (David Vern) I'd been reading in DETECTIVE COMICS in the early '70s was also an sf writer (and as Alfred Bester remembered it the NYC editorial rep for Ray Palmer in Chicago at Ziff-Davis) still contributing to the sf magazines as long as Palmer was still buying fiction...

This one sounds like a fun read. Thanks, James.

No, Bill Finger, who also created Batman, created the original Green Lantern. John Broome created the Silver Age Green Lantern. Fox created the Flash, Hawkman, and the Sandman, maybe others, and wrote just about every other character for DC, even if it was just in his Justice League stories.

I have the version at top.

I picked up some of Fox's Kothar books during in the wake of the Conan craze, but still haven't read them.

This book was pirated by Mafia, ooops sorry, Manor Books in the 1970s and re-titled as Titans of the Universe by James Harvey.
www.thepaperbackfanatic.com

People here seem ignorant of the fact that Fox wrote the very first Batman story ever- 'The Case Of The Chemical Syndicate' in Detective Comics #27-1939. His role in the development of the Dark Knight is enormous.